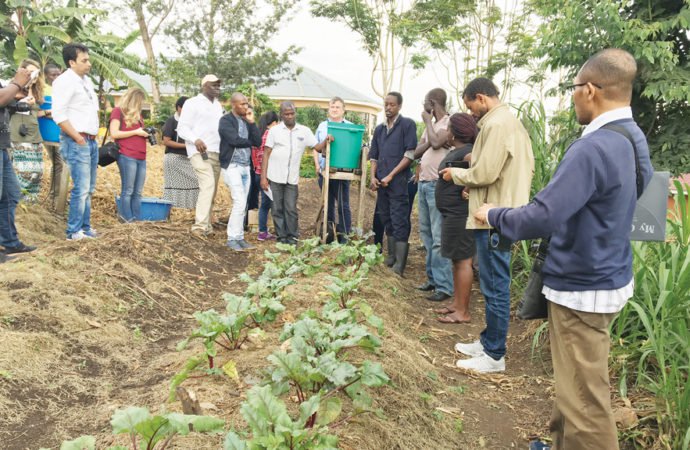 At CBA11 in Uganda, there were a number of participants from Bangladesh including from BRAC, Transparency International Bangladesh, and Practical Action

The series of international conferences on community based adaptation (CBA) was started in Bangladesh over a decade ago with the first few conferences held in Bangladesh and then they started being held in different countries including Tanzania, Vietnam, Nepal, and Kenya.

The 11th conference (CBA11)  in the series has just been completed in Kampala, Uganda hosted by Makarere University with over 300 participants from all over the world.

The four-day conference is always preceded by a three-day field visit by the international participants who stay with a community facing climate change and see how they are adapting to it.

The theme for CBA11 was on Ecosystem Based Adaptation (EBA) and its links to CBA. There were many discussions and even debates about the relative merits of each. In the end, the conclusion was that both EBA as well as CBA are essential for successful adaptation at the local level.

There was also a very strong emphasis on the need to focus on youth, especially university students, and turn them into climate champions and innovators. Makarere University held a parallel Youth Conference whose representatives were invited to give their statements to the CBA11 conference in the closing session.

The issue of engaging with youth is true for all countries but especially for Uganda which has the largest proportion of youth in the world.

Another important outcome at CBA11 was the launch of a new initiative by the chair of the Least Developed Countries (LDC) group, Mr Gebru Jember Endalew from Ethiopia of the LDC Universities Consortium on Climate Change (LUCCC) which is a south-south, LDC-specific, adaptation-focused, long-term, capacity development program involving 10 universities from LDCs in Asia and Africa — but will reach all 48 LDCs over time.

The initiative includes programs for exchange of researchers, faculty, and also students between the different partner universities. The objective of the initiative is to implement Article 11 of the Paris Agreement in Climate Change which requires the  development of long-term, in-country capacity building systems to tackle climate change in every country.

At CBA11 in Uganda, there were a number of participants from Bangladesh including from BRAC, Transparency International Bangladesh, and Practical Action.

At the end of CBA11, there was also a robust debate about whether to continue the conferences in the future and if so whether to change the format and focus.

There was strong support to continue and to bring in other actors including government and climate funding agencies.

Originally this article was published on July 13, 2017 at Climate-Tribune (Dhaka Tribune). The author Dr. Saleemul Huq is the director of the International Centre for Climate Change and Development (ICCCAD) at the Independent University, Bangladesh (IUB).sal
Email: saleem.icccad@iub.edu.bd

Can Bangladesh become a knowledgeable economy?

Over the next decade, there are going to be four mega global trends that all countries in …