The expressions of `knowledge’ or `technology transfer’ has traditionally evoked in us a unidirectional trajectory – from advanced, developed to developing countries, which are popularly called the `Global North’ and `Global South.’

This pathway has been drawn since the colonial era began a few centuries back. The colonial powers then transferred huge amounts of wealth and resources from their colonies and invested in developing their economies and societies.

As a result, underdevelopment was further reproduced in the colonized countries. Whatever developments in science and technology happened were associated with the western world. The UN Framework Convention on Climate Change (UNFCCC) embodies this notion of North- South transfer of technology under its Article 4.5.

There is no denying the fact that the western world is far advanced in basic research in most of the cases. However, since decolonization during the last few decades, many of the newly- emergent countries are progressing on a fast track and achieving significant advances in science and technology as well.

The central assumption was that the best practices of social and economic development in the Southern countries are more suitable for replication in other lower-income countries, because of the more similarities in conditions and their shared lived experiences of life. The South-South cooperation agenda also served as an ideological front to challenge the domination by the North in the global order.

But the world was getting more interconnected globally, both for opportunities and challenges out of globalization particularly since the 1990s. The Report ‘The Rise of the South: Human Progress in a Diverse World’ of the United Nations Development Program’s Human Development, pointed out several years ago that: “The South needs the North, and increasingly the North needs the South … The world is getting more connected, not less” (United Nations Development Program, 2013). 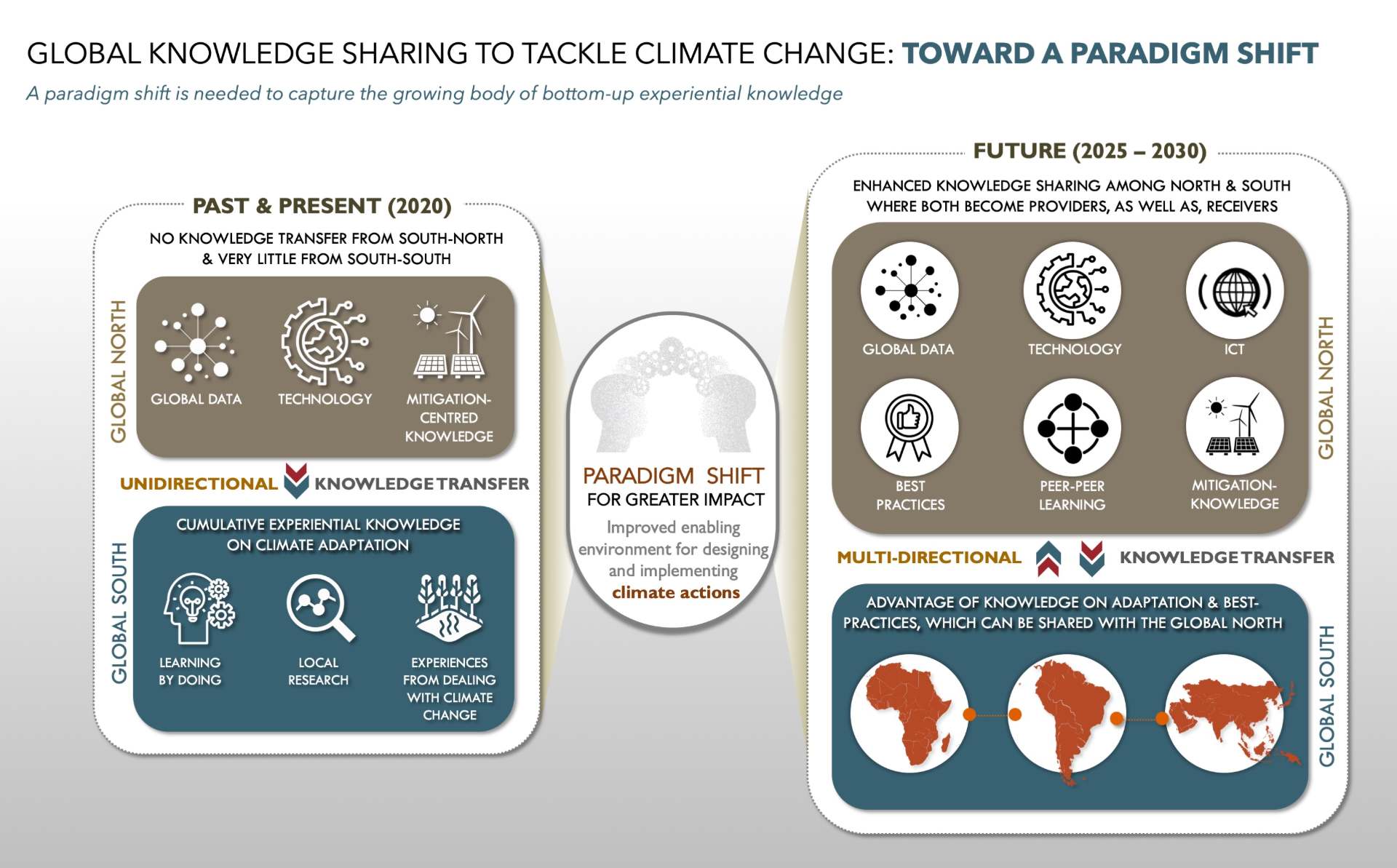 These transfers may include both soft and hardwares. David Lewis of the London School of Economics argues that models of participatory monitoring and evaluation of projects in developing countries have much to learn by the rich countries via NGO and public sector innovators (2017).

Quite a number examples, such as the development of oral rehydration, microfinance, recycling for waste management, rich social capital existing among the Southern communities, disaster management, community-based adaptation and nature-based solutions are few examples where experiential learning-based knowledge can be transferred from the Southern to Northern countries.

Along this line, the present piece presents some successful practices related to the nexus between climate change and poverty in the South which can be transferred to the developed North. In fact, some of these practices are already transferred.

IPCC reports repeatedly warn us that the poor communities and countries of the world are the most impacted from the effects of climate change, who have the least capacity to adapt. The impacts are likely to push an additional 100 million people into extreme poverty by 2030. In such a scenario, the use of microfinance as a tool to keep the poor out of extreme poverty is an innovation that decades back in Bangladesh.

Though the origin of microfinance emanated from the conventional practice of rotating/revolving fund historically practised in the Bengal areas of the Indian Sub-Continent, it was rechristened in its modern version by Dr Muhammad Yunus, the founder of the Grameen Bank in the early 1980s.

The Grameen Bank’s successful example of women-focused micro-credits to the poor and for promoting small entrepreneurship is already replicated in more than a dozen countries including in the UK and the US and in some other countries of the Global North. Such activities have been undertaken by organizations such as Acción USA, Grameen America, and Grameen Foundation Partner Project Enterprise in the United States.

In like manner, BRAC, the largest NGO in the world is another innovation of working with the poor in Bangladesh, which contributed a lot in poverty reduction and is now being replicated also in more than a dozen countries around the world. These are examples of innovative social engineering which are actively contributing to enhancing adaptive capacity of the poor. Few other examples show the knowledge transfer and experiential learning from the South to the North. The experience of disaster management and adaptation is another area in Bangladesh which is regarded as successful practices for a country often pounded by frequent natural adversities.

As a geographically disadvantaged area, Bangladesh has been living with climate disasters for ages and obviously, has learnt to live with them, gradually minimizing the casualties of life and property.

Still more than a percent of its GDP is devastated from these disasters on average a year, Bangladesh’s success in managing disasters and enhancing adaptive capacities of coastal communities are practices emulated already in many developing and developed countries.

The key to such success lies in elaborate institutional setups from national to lowest tiers of the local government including massive community mobilization prior, during and after the disaster events.

For the right reasons, Bangladesh is regarded as a `Teacher’ in adaptation, to learn from, by the former UN Secretary-General Ban Ki Moon. The Prime Minister of Bangladesh regards her country as the `adaptation capital’ of the world, and invites others to visit and see our experiences first hand. There are many examples of such experiential learning for coping with climate impacts, which are being shared and transferred to the Global North.

Let’s have a look at South Africa. Because of increased air pollution in the cities, the residents, including children, are suffering from asthma in increasing numbers. However, one innovation – the asthma inhaler spacers, which Dr Zahr, a physician from South Africa, has pioneered through research a simple device, effectively replacing the more expensive and less available commercial products.

These bottle spacers are now being produced by people working for community health centers in the United States and elsewhere. An asthma spacer is used with an asthma inhaler to make the medicine more effective by slowing down the spray and allowing the patient to coordinate their breath with the medication delivery. It can improve the efficiency of an inhaler by 70%.

Another concept — Eco-village was propagated with much fanfare in the Global North and development agencies about two decades ago, as a cardinal solution to restoring environmental sustainability in developing countries. This concept of eco-village was actually a rechristened version of the age-old lifestyle in the villages of developing countries.

We being from South Asia know very well, based on lived experiences of our communities. Still, rural areas in most of South Asia are representative of eco-village concept in practice, which integrates homesteads, space for gardening and cattle breeding, a patch of fruit trees, a pond, etc.

In like manner, now another shibboleth of solution for climate change and green growth is being presented as nature-based solutions (NbS). Again, the birth place and sustainability of NbS are the developing countries, from where the Global North can learn a lot about.

Another example of appropriate technology from countries like Bangladesh, India, China and many other developing countries is the decentralized solar power in remote off-grid areas. Bangladesh has already installed over five million solar home systems in remote rural areas and islands, which is the highest in the world.

Other Southern countries and the Global North, particularly the large, sprawling, sparsely- populated countries, can certainly apply this technology, which is cleaner and a lot cheaper, than installing costly central power distribution and transmission systems.

Through this short piece, we wanted to convey the message that there are lots of successful practices of disaster management, adaptation and renewable energy technologies that countries from the Global North can learn from. It’s a happy news that the centre we work in – the International Centre for Climate Change and Development (ICCCAD) in Dhaka is privileged to host a number of researchers and students from the Global North each year, who come here to learn about how Bangladesh, being a disaster-prone country, successfully adapts to the increasing impacts of climate change.

We have learnt to live with nature and disasters, harnessing the opportunities from these challenges. With the purpose of sharing knowledge and transfer of experiential learning for adaptation from the LDCs for South-South-North collaboration, ICCCAD is leading the LDC University Consortium of Climate Change (LUCCC). LUCCC is an official programme of the 47 LDC governments representing about one billion people in Asia and Africa. LUCCC is in the process of collating the best practices of disaster management and community-based adaptation and resilience.

Originally this article was published on June 29, 2020 at Dhaka Tribune.

Prof. Saleemul Huq is the director of the International Centre for Climate Change and Development (ICCCAD)

US President Biden’s first act upon being sworn in as President on January 20, 2021,…