Five years after the 2015 Paris Agreement was negotiated into existence, climate scientist Saleemul Huq says we are living in a climate-changed world.

Five years on, the United Kingdom — as the incoming president of COP26 to be held in November 2021— has convened a Climate Ambition Summit. To be held on the fifth anniversary of that momentous night, it serves as an opportunity for heads of government from around the world to share their revised plans for reducing greenhouse gas emissions.

And this is an opportunity they must take seriously.

Back in December 2015, the vulnerable developing countries, which I help to represent, advocated hard for a long-term temperature goal of 1.5 degrees Celsius. Our call was met with initial resistance from many developed nations, which made the ultimate inclusion of the goal in the Paris Agreement a major achievement for us.

But not enough has happened in the intervening years to set us on a path to meeting the target. We saw the US pull out of the accord, and although no other country followed suit, it was still a major setback to the global effort to combat climate change.

The overall loss of momentum in the past half-decade has allowed temperatures to rise by more than 1 degree Celsius above pre-industrial averages. The adverse impacts of this planetary warming are now becoming visible around the world, with wildfires, floods, droughts and hurricanes impacting lives and livelihoods.

We are already living in a climate-changed world.

One of the major outcomes of the Paris Agreement was to unleash the opportunities for nongovernmental actors including mayors of cities, heads of companies, civil society groups as well as youth and even children to take the requisite actions regardless of whether their own governments were doing so.

This has led to major global movements that have seen school kids — led by Greta Thunberg — push their parents and elders to take necessary action.

The future of the planet, however, cannot be left to such movements alone.

Joe Biden has pledged to rejoin the Paris Agreement as soon as he is sworn in as US president in January 2021. But if we are to come anywhere close to the 1.5- degree target for which we fought so hard, all countries will need to considerably increase their ambitions.

And when COP26 does finally happen next year, it must also be a forum to address the issue of supporting the victims of loss and damage as a result of global warming. Failure to do so may lead to failure of the COP.

Saleemul Huq is the director of the International Center for Climate Change and Development (ICCCAD) in Bangladesh. He also advises the Least Developed Countries (LDC) group in the United Nations Framework Convention on Climate Change (UNFCCC).

Originally this opinion piece was published on 12 December, 2020 at Deutsche Welle (DW) Media . 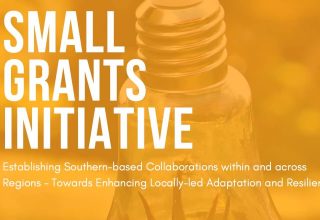