Charlotte Hugman one of our Visiting Researchers shares her story. 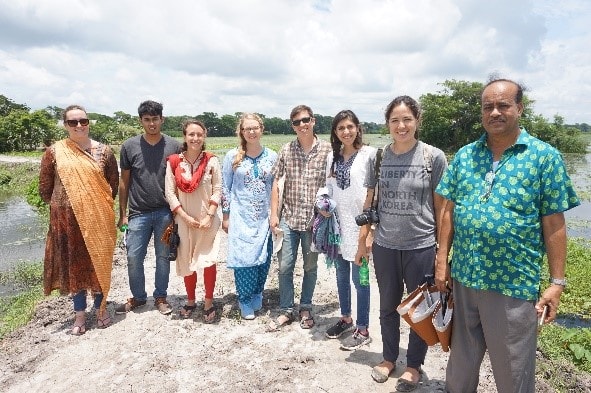 My journey to Bangladesh began some time ago, in the Himalayan mountains in April 2015. I had just recently qualified as a lawyer and had taken unpaid leave to travel round parts of Asia. My friend and I had started a 10-day trek to Annapurna Base Camp just a few hours before the Gorkha earthquake hit. We and the people around us were unharmed, but many parts of the country were devastated. Understanding something of that event guided me to change the focus of my career, and to pursue my MSc with the Centre for Environmental Policy at Imperial College London. It was there that Dr Huq, an alumnus of Imperial, invited us to spend time at ICCCAD in Dhaka as Visiting Researchers or “VRs”.

Bangladesh is at the heart of the impacts that climate change is already having on our world. Its exposure to floods, cyclones, droughts and land erosion contribute to it being the country 6th most vulnerable to climate change in the world. 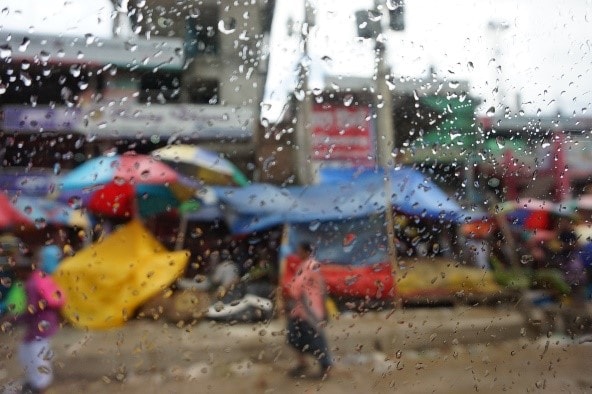 I therefore embraced the opportunity to join ICCCAD as a VR to explore the questions posed by my MSc thesis research into the role of public-private partnerships in sourcing adaptation finance from the Green Climate Fund. In particular, I aimed to learn about the realities of the challenges being faced by a country like Bangladesh at a community level, as well as the ideologies and understanding of different types of national and international stakeholders in the discussion.

Arriving in Dhaka felt familiar but also distinct to other places I’d been before. The heavy rain the evening I landed meant my 7km journey from the airport took almost an hour through the thick traffic on the highway. I soon learnt that if you haven’t been stuck in traffic in Dhaka, you haven’t really been to Dhaka! I quickly felt part of the team at ICCCAD, and amongst the other VRs – together, a fantastic group of people researching climate change-related issues spanning urban resilience and city planning, resilient livelihoods, climate migration, research and knowledge management, adaptation technologies, adaptive capacity, narratives and constructs of climate change, and climate change and global inequalities. 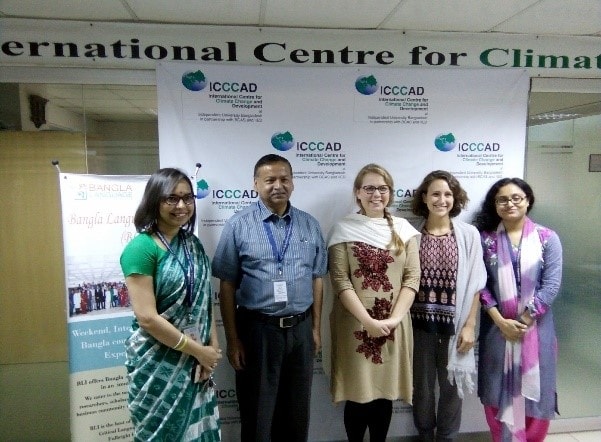 My time spent on my thesis research in Dhaka primarily involved speaking with a variety of relevant stakeholders. I also had the opportunity to get involved with ICCCAD projects relating to climate finance, green growth, capacity building training for public sector stakeholders, and mainstreaming climate change in NGOs.

Another VR and I elected to take some beginners’ Bangla language classes at the Bangla Language Institute to help us communicate with everyone around us. We ended up being able to read and write simple Bangla in just a few weeks.

The ability to read numbers proved extremely useful in identifying car number plates and office room numbers correctly, and so quickly unlocked our many journeys around the city! I attended several meetings and conferences, including one on disaster management and loss and damage which was (almost) all in Bangla.

Whilst I couldn’t understand everything, I was able to greet other participants and absorb some of the event. We explored the city, embraced the traffic and occasional floods – heavy rain is a key feature during the summer months! – navigating our way by cycle rickshaw and CNG. Having arrived shortly before Eid-al-Fitr, we experienced Iftar dinners with people breaking their fast, and saw the city celebrate and people visit each other in amazing outfits to wish one another Eid Mubarak.

We also undertook a four-day field visit to see, feel and better understand the impacts of climate change and how people are adapting to these in the south-west of Bangladesh, through Gopalganj, Khulna and to the top of Sundarbans. We met people who have raised their homesteads to protect themselves from rising waters; communities who have been hit by heavy floods; and learnt about training programmes preparing young people for migration. The people we met, like the people I met in Nepal, understand and are resilient to such shocks. The experience really helped me understand and re-frame what adaptation means at a local level, and therefore how it should be understood at a global level.

(school and flood shelter; raised homesteads, both in Gopalganj)

Reflecting on home also happened naturally whilst I was in Bangladesh, not least because I came away from a particularly pensive atmosphere in the UK, just a couple of weeks after some attacks in Manchester and London. The UK can learn a great deal from Bangladesh. The two countries face very different challenges, but in many ways, their similarities are greater than their differences. They both face migration to their capital cities that threatens to overwhelm them, especially within the context of developing sustainable cities, and threatens to deplete populations from rural areas and district towns. They both face increased frequency of floods, that put communities under threat, and higher temperatures that impact the health and safety of the young and elderly disproportionately. The UK could seek to draw on the prospective Migration Corridor of Bangladesh to enhance its own Northern Powerhouse and HS2 projects that also aim to incentivise migration to and investment in areas outside the capital. It can also seek to adopt a forward-looking, vision-oriented approach to policy and planning, similar to that which pervades much of the approach of the Government of Bangladesh. It appears that as time goes on, people in Bangladesh will have more and more knowledge and understanding of adaptation that the UK will want to learn from.

(mangroves in the Sundarbans; Dhaka university)

I learnt more than I could have hoped during my time at ICCCAD: I learnt about stakeholders’ views on adaptation finance, and gained some first-hand understanding of how adaptation unfolds in reality; I learnt about various ways in which ICCCAD and others are moving the discourse forward on tackling climate change; I learnt how important is it to facilitate discussion and appreciate the expertise of others. Perhaps most importantly, I learnt to listen and learn better. I learnt in various ways: through talking (occasionally in Bangla!), participating, and feeling. The generosity of the people around me to share and develop ideas has been invaluable. I am very grateful to everyone at ICCCAD and all those who took the time to help me learn and understand some of these issues a little better. I intend to carry this forward into my current and future research and work, and hopefully feed back into the discourse at every opportunity.

The author Charlotte Hugman is an MSc Candidate at the Centre for Environmental Policy, Imperial College London.