In Caloco, a village in the Municipality of Tinambac, the fishers’ community is opting for an alternative livelihood option to deal with the dual crisis of the global pandemic and typhoon Pepito.

This is the twenty-ninth in the series of stories from Voices from the Frontline initiative by ICCCAD and CDKN.

Caloco is a village in the Municipality of Tinambac under Camarines Sur province of the Philippines. The 25-hectare fish sanctuary in Caloco was established in 2006. It is managed by the local government unit in partnership with Rare Philippines and Samaca, a local Fishers’ Association.

Robinson Ben Callao, a 45-year old fisherman, has been living in the village for almost 20 years. He spends every day at sea, and faces the possibility of disaster, borne by extreme weather, each time. For him, there is a trade-off between safety and plenty: a rough sea means more fish in the basket and profitable income, if he is lucky.

He is one of the few fortunate fishermen in Caloco village, who has been able to build a modest house where he lives with his five children. He also owns a “palakaya” or fleet of fishing boats.

Ben has served for three years as a “Bantay Dagat” (guardian of the sea). He keeps an eye on the illegal poachers to protect the municipal waters, especially their fish sanctuary. He and his team usually go fishing as far as the West Philippines Sea.

Dealing with dual crisis – the pandemic and typhoon Pepito

Ben’s regular life was halted when the enhanced community quarantine (the strictest version of lockdown) was enforced by the government. Along with the rest of the country, enhanced community quarantine was also placed in Camarines Sur province, with closure of the borders and restriction of movements. Only one member from each household was issued a quarantine pass and allowed outdoors to run errands or to buy food and other essentials. The lockdown affected the local economy greatly, especially the fishers in the rural areas.

“Fishing is our way of life, the main source of livelihood. But the global pandemic badly affected our livelihood. It would have been better if the government realised that we are also among the front liners and allowed us to go on fishing,” says Ben in his native Bicolano language.

The enhanced community quarantine was enforced for two months, when Ben and his fellow villagers relied only on food ration provided by the municipal and provincial government. When the lockdown was eased to general community quarantine, Ben was allowed to go fishing only after wearing masks, washing hands, and maintaining proper hygiene etiquette.

“But when we were allowed to go fishing, our problem was how to sell our fish in the market without buyers allowed from Metro Manila to come to our town. There’s no market except for locals who are not capable of purchasing high-end marine products like Lapu-lapu, tanguige, maya-maya, and lobster, among others,” he said. Limited storage and unavailability of ice supply also aggravated their problems in preserving the fresh sea harvest.

As a fisherman, Ben’s survival skills to save himself from the raging seas was tested during typhoon Pepito in October 2020. On October 13, Ben and his 16-year-old son Robinson Jr. survived the raging seas after the boat capsized at 7:00 a.m. within the “Simaron” zone of the Pacific Ocean, which is known for its whirlpool and dangerous current.

Ben and his son were unaware when they left home that typhoon Pepito was already approaching and that a Signal 1 storm warning had already been issued for the area (meaning that the most intense storm conditions were approximately 36 hours away).

“We were able to swim for eight hours with the support of the boat’s PVC pipe, which served as our floating device in the raging waters,” he narrated.

“To survive, we need to be relaxed. For eight hours floating at sea, we prayed for safety. Luckily, the bigger waves that were pummeling us then were favorable to our direction back to the nearest shores. Though I was not afraid of the incident, my son went through a trauma,” he added. 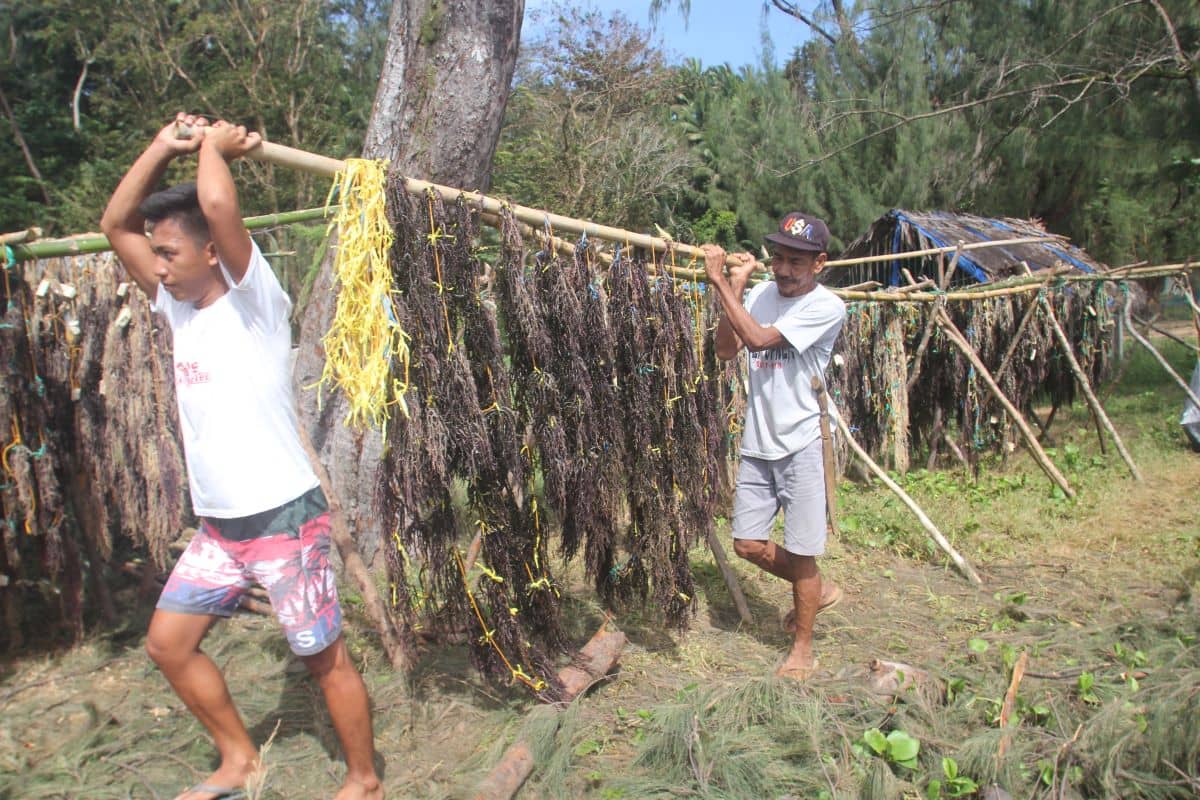 The Philippines is known to have more than 800 species of seaweeds, two of which are used in farms to extract the carrageenan, a substance that is commonly added to foods and drinks as a thickener and used in medicines. Camarines Sur province is one of the top producers of carrageenan and the government also promotes seaweed farming as an alternative to fishing.

Since the fishermen in Caloco could not go fishing on the high seas during lockdown, they opted to go on seaweed farming just a few metres away from the shorelines of Caloco. This provided an alternative source of livelihood, and a local market for the product is also available.

Young and elderly here work together in propagating carrageenan. Seaweed farming may not be as profitable as fish, lobsters and other marine products, but carrageenan production helped them achieve a hand-to-mouth existence, in the middle of the pandemic.

The fisher-folks are also integrating seaweed farming with fishing by planting carrageenan-bearing seaweed within the fish sanctuary. The seaweed planting is usually done by the villagers during the typhoon months from June through January.

Despite dealing with typhoons every year, fishermen like Ben have passed the hardest time during the lockdown as they had no income. “I’m more afraid of the global pandemic than the typhoons as we can prepare for natural calamities but not the pandemic as we cannot see the virus. Our faith in God is even stronger and we’re praying for the pandemic to be over,” he adds.

To deal with the future unprecedented crisis, the fishing community seeks support from the local government to ensure proper seafood storage facilities to preserve their products and be able to get their desired price. 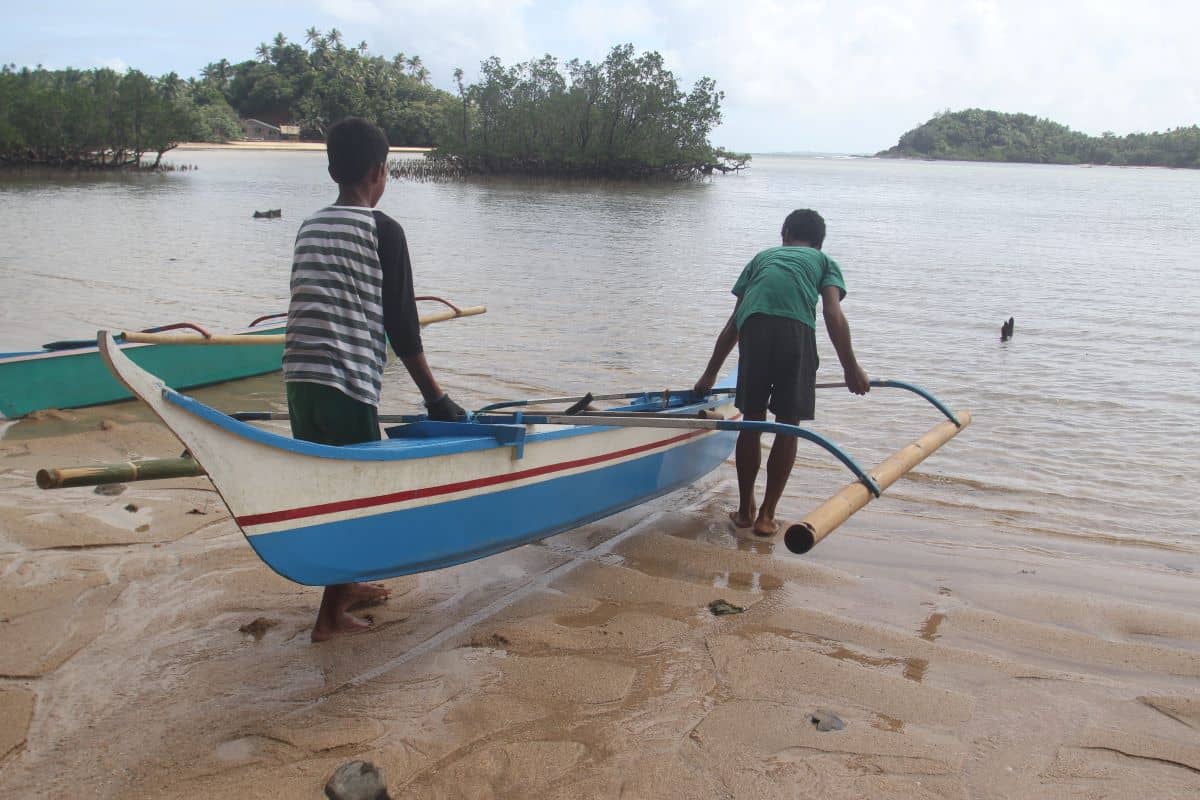 In a year like never before, the world is crippled by coronavirus pandemic. No single country rich or poor is ready for global pandemic, much less developing countries, like the Philippines. For nearly one year, the grassroots communities are struggling against the impact of the coronavirus pandemic as the country’s economy is shrinking and heavy under  uncertainty for the future. Sadly, the impact badly affected the marginalised socioeconomic sectors (farmers and fishermen) of the society. The impact of COVID 19 has even worsened in the Philippines specifically in the Bicol region following the occurrences of stronger typhoons that pummeled the countryside in the middle of the pandemic. Through my lens, these marginalised people suffered the brunt of complex disaster events in the middle of the pandemic as they could not go on fishing and farming activities during the course of enhanced community quarantine or total lockdown. They lost economic opportunities without access to public transportation or suitable storage and carriage facilities  to bring their products to the market.

Rhaydz Barcia is a photojournalist who regularly reports on the environment and climate change; disaster risk reduction; political and social issues. She currently works as a correspondent for Rappler as well as Manila Times, the oldest newspaper in the Philippines. She is also a stringer for Reuters and other news outlets.

Robinson Ben Callao, aged 45, is a fisherman living with his family in Caloco village, under Tinambac municipality of Camarines Sur province in the Philippines for 20 years.

In Chakaria upazila, Cox’s Bazar, Bangladesh, a women’s association is  partnering with th…