During the 26th UN Climate Change Conference (COP26) in Glasgow, Scotland last year, developing countries put forward a proposal to create a Finance Facility for Loss and Damage (FFLD), which was not accepted by developed countries. Instead, they replaced it by setting up the Glasgow Dialogue on Finance for Loss and Damage, which would carry on for three years before it would have any outcome.

Needless to say, this was a great disappointment for all the developing countries attending COP26. However, one important development that did happen in Glasgow outside the main COP event was the setting up of a new loss and damage fund by the First Minister of Scotland Nicola Sturgeon, who challenged others to match her contribution. Since then, the government of the province of Wallonia in Belgium has promised funds, as have several philanthropic foundations. More recently, Denmark was the first party to the United Nations Framework Convention on Climate Change (UNFCCC) to have allocated funds specifically for addressing loss and damage caused by climate change.

At the same time, the finance ministers of the member-states of the Climate Vulnerable Forum (CVF), who are known as the V20, also created a loss and damage funding window in their own multi-donor fund.

Earlier this month, the Government of Scotland invited representatives from all the governments and organisations who have stepped up to address loss and damage on the ground for a two-day conference in Edinburgh, together with the high-level champions of the UNFCCC whose role is to engage with non-state actors on the platform’s behalf.

I was invited to speak with First Minister Nicola Sturgeon at the opening session of the conference, where she reiterated her three principles for funding loss and damage: first, the funds must be new and additional; second, the funds should be provided as grants and not as loans; and third, they must be explicitly allocated to address loss and damage from human-induced climate change. 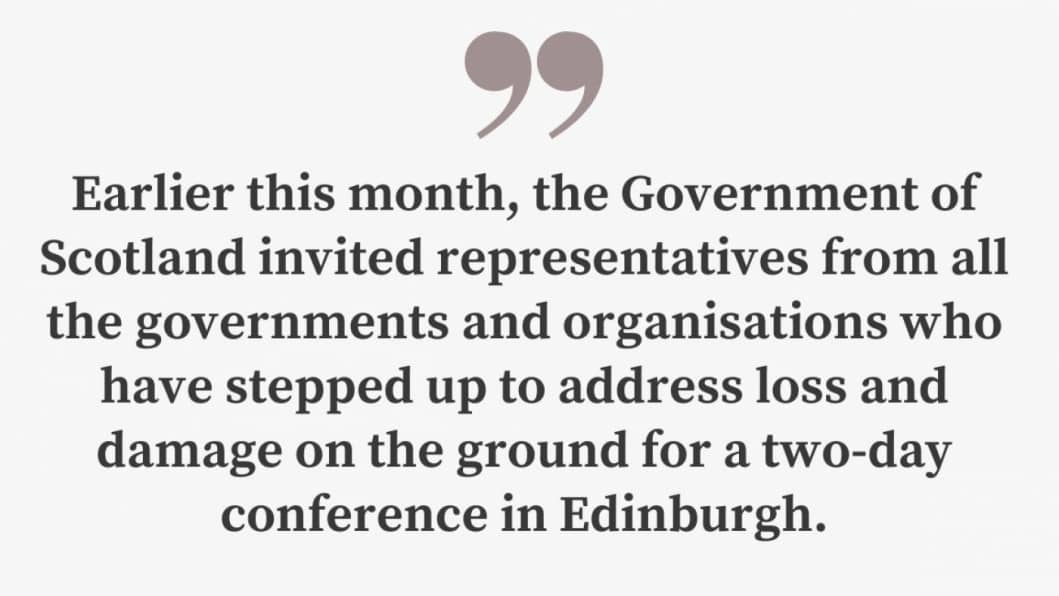 At the end of the conference, a new coalition of actors, both governments and organisations, is emerging. These actors are addressing losses and damages from human-induced climate change now.

The challenge will now be felt at COP27, due to be held in Egypt next month. Ahead of the conference, Pakistan, on behalf of all the developing countries, has tabled the agenda of finance for loss and damage once again, and it needs to be approved at the beginning of COP27. If any country opposes this agenda item and thus causes it to not be adopted, then it will signal a failure of COP27 before it even starts officially.

However, assuming that the agenda item is not blocked, the negotiations can proceed with a view to having a decision at the end of COP27 to establish an FFLD by COP28, to be held in Abu Dhabi next year. Such a result will indicate genuine progress at COP27.

At the same time, as last year’s conference was held in Edinburgh, there was another important meeting of the V20 and G7 finance ministers in Washington, DC on the sidelines of the annual meeting of the International Monetary Fund (IMF) and World Bank, where the two groups of finance ministers also agreed to address loss and damage from climate change. The details of how this will be achieved in practice still remain to be explained, but it is indeed a good development.

Originally this article was published on October 18, 2022 at Daily Star. The author Prof. Saleemul Huq is the director of the International Centre for Climate Change and Development (ICCCAD) at the Independent University, Bangladesh (IUB).
Email: saleemul.huq@icccad.org