Over the last 50 years, Bangladesh has been recognised in South Asia as well as around the world as a laboratory for development success in alleviating poverty, girls’ education and inclusion in the workforce, and unlocking the potential of the private sector in banking, industries and commerce, among others.

This development was by no means perfect, particularly when it comes to protecting the environment, which was badly neglected, and also with regard to inclusive development where the divide between the richest and the poorest citizens has been getting worse. So, looking at the development pathway for the next few decades, we need to rectify these two major flaws in our development pathway to become more environment-friendly as well as more equitable in the benefits of development investments.

Let me share some ideas on ways in which Bangladesh can become a global laboratory for climate change solutions in the future.

The first recommendation is to expedite the pace and quantum of investments in tackling climate change in all our development investments, both in different ministries in the government and, perhaps even more importantly, in the private sector and civil society. This is already happening. There are a number of national plans that are being developed to achieve this goal, including the Nationally Determined Contributions (NDC), the National Adaptation Plan (NAP), and the Mujib Climate Prosperity Plan (MCPP). Now these plans must be folded into the main national planning process with a priority for the Ninth Five-Year Plan (9FYP), which will be developed soon. Mainstreaming climate change activities such as mitigation, adaptation, and loss and damage is now essential for the 9FYP.

The second recommendation to focus on is building the capacity of our young citizens, with a priority on educating girls, to make them climate-literate citizens and indeed mould them into future climate champions. Investing in our youth is the single most lucrative measure in terms of value for money over a decade or so. This should become a major priority for us immediately. Bangladesh needs to look to transformational ways forward, rather than incremental ways only. Investing in today’s youth will lead to the transformation of the country tomorrow. 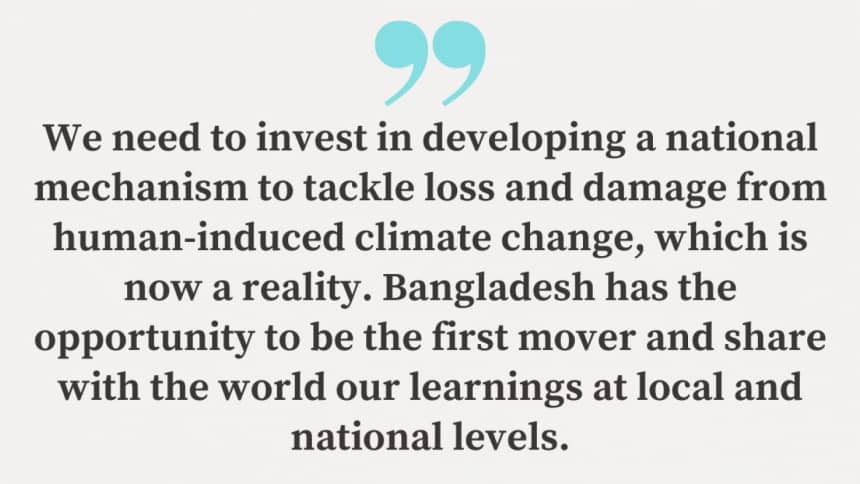 Another aspect of tackling climate change, in which Bangladesh is already a globally acknowledged leader, is Locally Led Adaptation (LLA), where the country is investing in vulnerable communities to enable them to adapt to the adverse impacts of climate change that is already happening. This now needs to be made into location-specific LLA for each different ecosystem – from coastal zones to the hill tracts, to haor areas, to the Barind Tract, to urban areas.

Next, our private sector needs to accelerate their investments in mitigation measures, such as solar power, going from small scale to larger scale as rapidly as possible. At the same time, investments in adaptation are needed so that companies can make profits from supporting communities to adapt to the adverse impacts of human-induced climate change. This is still untapped potential where our dynamic private sector can also become global leaders and sell their knowledge to the rest of the world.

Finally, we need to invest in developing a national mechanism to tackle loss and damage from human-induced climate change, which is now a reality. Bangladesh has the opportunity to be the first mover and share with the world our learnings at local and national levels.

Our world has just now entered the era of loss and damage from human-induced climate change and each country will have to learn how to tackle the new and emerging situation. Bangladesh has the potential to become a global laboratory of climate actions and solutions going forward.

Originally this article was published on September 13, 2022 at Daily Star. The author Prof. Saleemul Huq is the director of the International Centre for Climate Change and Development (ICCCAD) at the Independent University, Bangladesh (IUB).
Email: saleemul.huq@icccad.org