The United Nations Framework Convention on Climate Change (UNFCCC) was signed 30 years ago at the Earth Summit held in Rio de Janeiro, Brazil, by all the governments of the world. The first annual Conference of Parties (COP1) was held in Berlin, Germany, with the then Environment Minister of Germany, Angela Merkel, as COP President in 1995. Since then, there have been 26 COPs, and COP27 is scheduled to be held in Sharm El-Sheikh, Egypt, in November this year.

COP27 will be the first COP in the new era of climate change, where impacts and losses and damages have become daily phenomena in different parts of the world. And Egypt has already promoted the idea of it being an action-oriented COP, with the focus on adaptation and loss and damage.

As one of the few people who has attended every COP so far, I think these sessions are no longer fit for the purpose, and I use COP27 as an opportunity to make some suggestions for revising the COPs and how they are organised and reported on going forward, to make them fit better in the new era of loss and damage from human induced climate change.

The first issue to address is the difference between talk and action. COP was designed for governments to come together and talk and make collective decisions to tackle the problem of human induced climate change. While that was adequate while we still had time to prepare ourselves through actions like mitigation and adaptation, it is now too late. Hence, the emphasis needs to shift dramatically from talk to action. This is indeed happening through some initiatives. 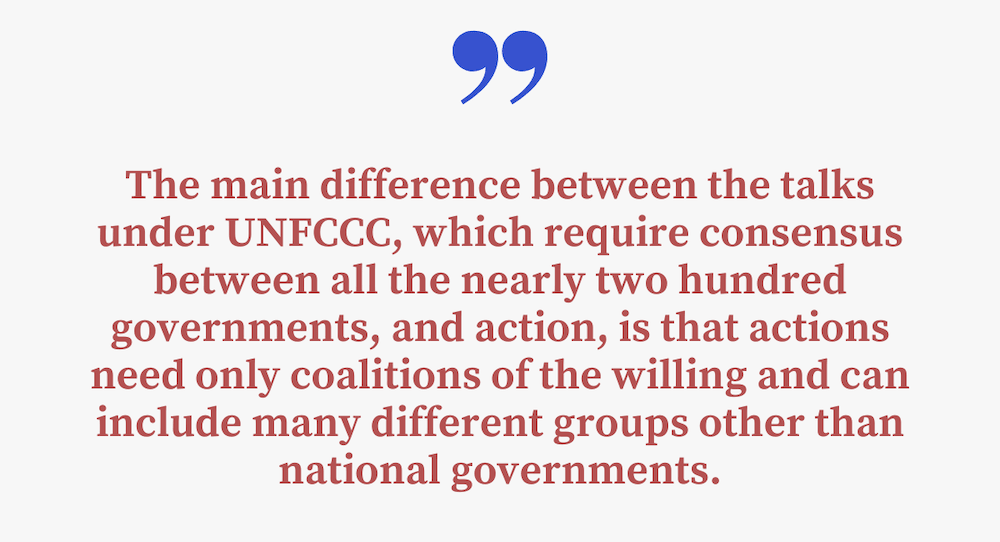 The main difference between the talks under UNFCCC, which require consensus between all the nearly two hundred governments, and action, is that actions need only coalitions of the willing and can include many different groups other than national governments.

Hence my first proposal is to restructure the COPs to give centre stage to the coalitions of actors that are taking meaningful action and relegate the talkers to the backstage. This does, in fact, happen to a certain extent by designating a thematic day each day during the COP on a particular theme such as mitigation, adaptation, etc. This was quite successfully done by the COP26 presidency in Glasgow last year, and it is good to see that the incoming COP27 presidency of Egypt is also planning to continue this practice.

The second proposal is for all the different coalitions to find ways to find synergies between them, and where possible, join forces to enhance the effectiveness of their respective actions. This would mean a very different way of working together with many different stakeholders, not only national governments, and more importantly, will not require consensus to reach decisions.

My third proposal is to elevate the topic of dealing with the now visible and getting worse, adverse impacts of human induced climate change, which are happening everywhere in the world. This is truly an emergency that is much bigger than the war between Russia-Ukraine, or the Covid-19 pandemic, and we need a much stronger and more robust approach to address it.

Unfortunately, the UNFCCC has so far shown itself to be totally inadequate in dealing with it. In fact, loss and damage is not even a standing agenda item in every COP. This time, for COP27, the developing countries have proposed it as an agenda item which has been accepted provisionally and will be subject to a debate as to whether it should be in the COP27 agenda at all.

In my view, all countries should agree to include loss dnd Damage as a regular agenda item in every COP going forward. Failure to accept it as such, which we will know at the beginning of the next COP, will make or break COP27 before it even starts.

If the UNFCCC is to still have any semblance of relevance, COP27 must adopt loss and damage as a regular agenda item for all future COPs, starting with COP27.

Originally this article was published on August 16, 2022 at Daily Star. The author Prof. Saleemul Huq is the director of the International Centre for Climate Change and Development (ICCCAD) at the Independent University, Bangladesh (IUB).
Email: saleemul.huq@icccad.org