Over the last few weeks, a number of developments around the world has brought forth the need to hold polluters responsible for the loss and damage they have been causing the planet. The latest such event is the devastating floods in Pakistan, which has been scientifically attributed to human-induced climate change.

United Nations Secretary-General Antonio Guterres called the floods “climate carnage” on his recent visit to the country and laid the responsibility clearly on the polluters. The Pakistan government, which currently chairs the group of all developing countries at the United Nations Framework Convention on Climate Change (UNFCCC), has demanded that finance for loss and damage from human-induced climate change be included in the agenda for the upcoming 27th UN Climate Change Conference, also known as the Conference of Parties (COP27). It has been accepted as a provisional agenda item, but it will need to be adopted by all the countries at the beginning of the conference. And if any of the developed countries block the adoption of this agenda item, the developing countries should simply declare COP27 dead even before it starts.

Meanwhile, the newly appointed UN Special Rapporteur on Climate Change and Human Rights, Dr Ian Fry, chose to visit Bangladesh for two weeks to see the actual losses and damages suffered by people in Sylhet and Satkhira districts. Before leaving Bangladesh to deliver his report to the UN General Assembly (UNGA) in New York, he clearly stated that the sufferings of people in Bangladesh were caused by the polluters, and the time has come to make the polluters compensate their victims.

Also, at the UNGA, Vanuatu has placed a resolution to ask the International Court of Justice (ICJ) for an advisory opinion on making polluters pay for the losses and damages they have caused and continue to cause. The advantage of the resolution is that it can be won by a simple majority, while the UNFCCC can only come to decisions by consensus, where a small number of polluting countries can – and do – block every decision.

However, there is some better news. The first minister of Scotland, Nicola Sturgeon, during COP26 held in Glasgow, Scotland last year, offered two million pounds towards a new Loss and Damage Fund to help the victims of human-induced climate change in the developing countries. She made it quite explicit that these funds were being offered not for adaptation or development assistance, but as reparations for the harm done by Scotland’s greenhouse gas (GHG) emissions since the Industrial Revolution. She also challenged other leaders to match her funds. Unfortunately, none of the global leaders offered any funding, but the provinces of Wallonia in Belgium offered a million euros, and several philanthropic foundations offered several million US dollars, so there is now a fund available to help the victims of climate change. While this fund is not much, it is more than what any of the polluting countries have offered.

Furthermore, Nicola Sturgeon will be hosting a meeting of all non-state actors who have already started to address losses and damages from human induced climate in Edinburgh in October, where she has kindly invited me to attend and speak. 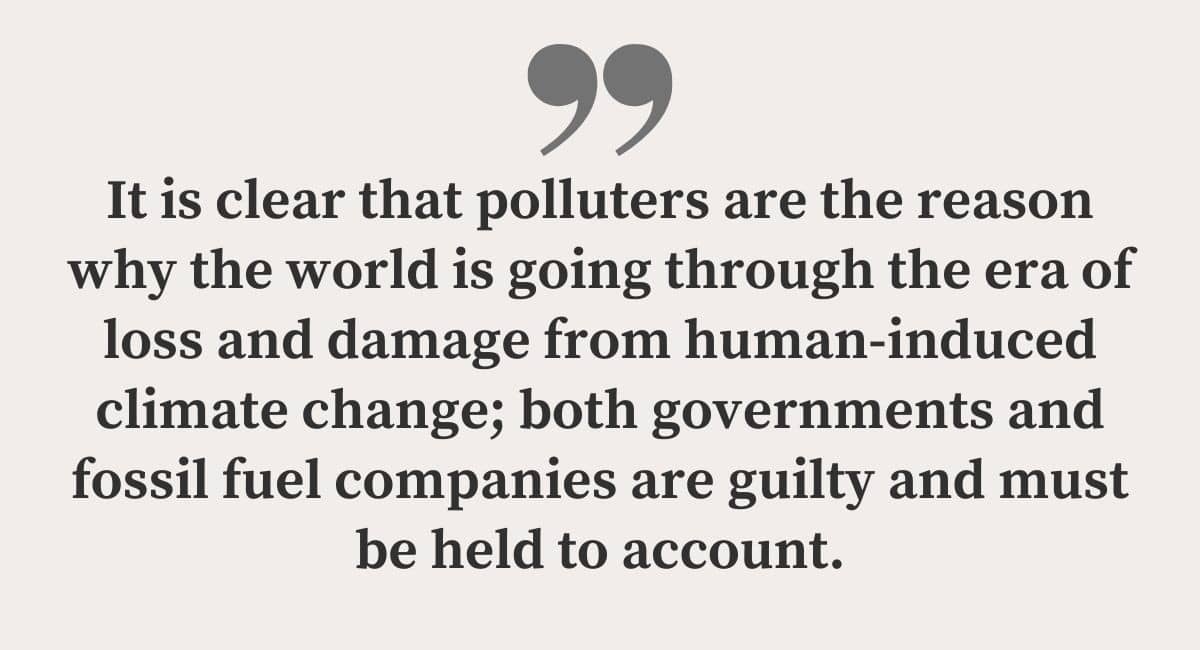 At the same time, the Climate Vulnerable Forum (CVF) and the forum of their finance ministers (called the V20) have set up their own loss and damage finance facility for fast-tracking funding to communities in vulnerable developing countries who are already suffering. They have provided some of the funding themselves and have received donations from a few foundations. They will be announcing a crowd-funding opportunity to receive donations from anyone who wishes to express solidarity with climate victims.

Fridays for Future, the global school students’ movement for climate action, is planning its next Friday’s Climate Strike on September 23 to focus on supporting climate victims and help them deal with losses and damages by donating their lunch money to the V20 Loss and Damage Fund.

Finally, it is time to confront the fossil fuel companies who are the real criminals behind the climate crisis – who have knowingly caused harm in order to continue to make profits and have also been influencing politicians in the polluting countries who have been blocking progress in the UNFCCC. Civil society groups in the developed countries, such as Extinction Rebellion, are staging protests against these companies, and there is a growing number of lawsuits being filed against them, but progress has been slow and needs to be scaled up fast.

It is clear that polluters are the reason why the world is going through the era of loss and damage from human-induced climate change; both governments and fossil fuel companies are guilty and must be held to account. This must be done in different forums, including the UNFCCC and the UNGA, as well as the G7 and G20 meetings and under the ICJ. Most importantly, they should be held to account in the global court of public opinion, where school students are leading the way and challenging the adults to follow them. Everyone should support them.

Originally this article was published on September 20, 2022 at Daily Star. The author Prof. Saleemul Huq is the director of the International Centre for Climate Change and Development (ICCCAD) at the Independent University, Bangladesh (IUB).
Email: saleemul.huq@icccad.org

Loss and Damage fund established at COP27: what happens next?

Saleemul Huq, one of the most persistent long-term advocates of a ‘loss and damage’ fund o…