As we near the end of the two weeks of intense negotiations at the 27th United Nations Climate Change Conference (Conference of Parties – COP27) here in Sharm el Sheikh, Egypt, things are certainly heating up.

The biggest and newest issue is that of loss and damage finance, which was finally accepted as an official agenda item in a COP for the very first time – after hard, all-night negotiations. This in itself is a significant win for the climate-vulnerable developing countries, and is now being taken to the next level. The developing countries are united in their demand for the establishment of the Sharm El Sheikh Finance Facility for Loss and Damage (SSFFLD) at the end of the climate conference later this week. This will take a lot of heavy negotiations, for which we are fully prepared. During the high-level sessions last week, leaders of several countries including Scotland, Belgium, Denmark, Austria, and New Zealand offered finance to cover the loss and damage caused by human-induced climate change, which is a very welcome development.

Unfortunately, US President Joe Biden did not make any such promise when he spoke.

At the same time, the fulfilment of the pledge made at COP26 in Glasgow, Scotland last year by the developed countries to double their funding for adaptation measures to tackle the impacts of climate change in the developing countries is still being debated and discussed.

Finally, the perennial issue of reducing global emissions of greenhouse gases (GHG) to keep the global temperature rise below 1.5 degrees Celsius still remains on tenterhooks as the opportunity to stay below that level is rapidly diminishing every day. All the countries are now being urged to raise their goals to reduce GHG emissions faster than they have promised before. 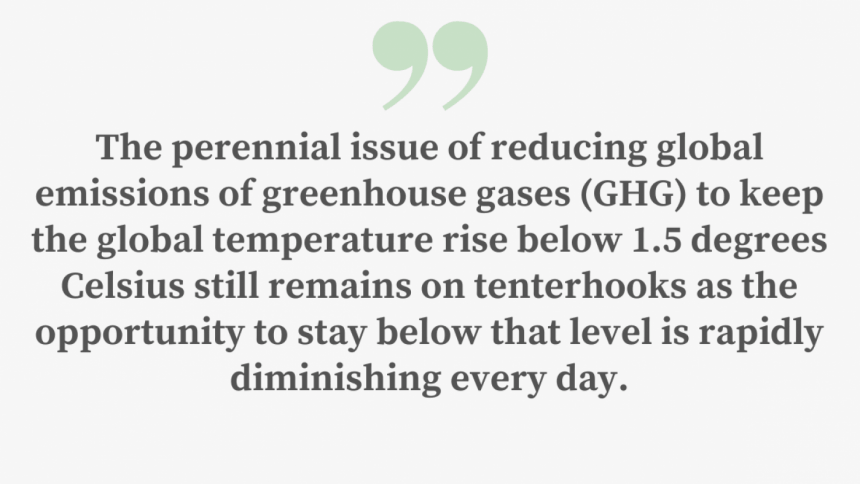 The Bangladesh delegation is headed by the environment minister, and the Bangladesh pavilion has been hosting sessions all day, every day by different ministries and NGOs, telling others about what is happening in Bangladesh. The country is one of the most climate-vulnerable countries in the world, and has been experiencing many impacts of climate change in recent years. The World Bank recently published a thorough analysis of various adverse impacts of human-induced climate change that will hit our country over the coming decades, increasing the frequency and severity of coastal flood events. The estimated losses amount to USD 570 million every year going forward if measures are not taken to minimise those impacts.

Pakistan, too, saw devastating floods this year, which UN Secretary-General Antonio Guterres called a “climate carnage.” The heat waves all over the world this year have also been alarming.

We hope that the debates and discussions on doubling the fundings by the developed countries to adapt to climate impacts in order to minimise the effects of such extreme weather events – results of a changing climate – end with a positive outcome that will benefit climate victims.

This year, COP27 has more than 40,000 participants, most of whom are participating in many different activities in the different pavilions, where they can network with like-minded groups from around the world. Thus, this conference is a combination of a “Talking COP,” where the official negotiators talk into the late night, and an “Action COP,” where different groups including youth, scientists, private sector actors, parliamentarians, mayors and many others meet to discuss actual actions to tackle climate change.

Let’s hope the negotiations that are taking place at COP27 will bear fruitful results and, by the time the climate conference wraps up, we will be one step closer to tackling the climate crisis.

Originally this article was published on November 15, 2022 at Daily Star. The author Prof. Saleemul Huq is the director of the International Centre for Climate Change and Development (ICCCAD) at the Independent University, Bangladesh (IUB).
Email: saleemul.huq@icccad.org