As the world is currently in the era of loss and damage from human-induced climate change, the need for Bangladesh to invest in different aspects of the issue at the global level has also entered a new era which will need significant investment in enhancing our capacities for climate diplomacy in different platforms.

Let’s start with the annual Conferences of Parties (COPs) of the United Nations Framework Convention on Climate Change (UNFCCC), where the Ministry of Environment, Forest and Climate Change (MOEFCC) has always taken the lead to represent the Government of Bangladesh. The official Bangladesh delegation is usually led by the environment minister for the high-level part of the COP and the secretary for the technical part of the event. As the individuals holding those positions change over time, they need support from individual negotiators who have long experience in the COP process, since it is quite complicated and difficult for newcomers to understand quickly.

Fortunately, Bangladesh has several experienced negotiators in the Department of Environment (DoE) who don’t get transferred out. However, it is time for the DoE to invest in building the capacity of the next-generation negotiators for the future climate conferences. At the same time, the government benefits from a group of non-government experts who have been following different agendas for many years and can provide expert advice to the official delegates. However, these experts are also growing old, and a new generation of experts is needed.

There are, nowadays, many different parallel activities during the COPs involving various coalitions of actors – some of which see government ministers and officials attending – as well as other networks for civil society, youth, private sector, scientists and many other such groups.

Over the last few years, Bangladesh has participated in many such meetings. However, one thing that is needed is for all the people going to the COPs, both from the government and non-government sectors, to find a way to share their respective activities to ensure that all Bangladeshis at a COP are speaking with a united voice. 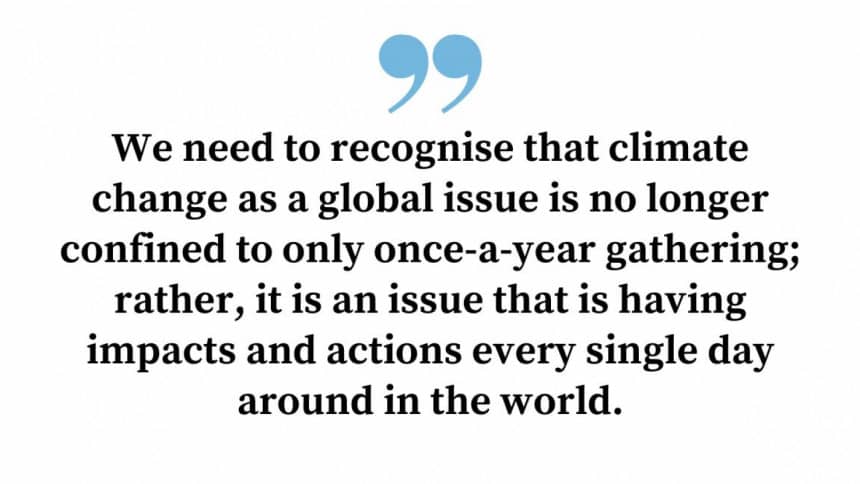 One good way in which this has been done at the last two COPs was having the Bangladesh pavilion, which was used as a meeting venue to showcase activities by both government and non-governmental actors from Bangladesh. This has proven to be quite effective and should be repeated at every COP going forward.

The second main point that we now need to recognise is that climate change as a global issue is no longer confined to only once-a-year gathering; rather, it is an issue that is having impacts and actions every single day somewhere in the world. Thus, climate diplomacy must become integrated into the training of every batch of foreign service officers so that they are aware of climate change issues and can speak about them wherever they may be posted. In fact, as our diplomats get posted to different countries, they are increasingly being asked to talk about how Bangladesh is tackling climate change, given our reputation as a climate champion. This is indeed an asset for “Brand Bangladesh,” in which we should invest as much as possible.

A third group of actors who have a global role to play on the topic of climate change are our scientists and researchers. Bangladesh has already acquired a well-deserved reputation as a global leader on adaptation to climate change, but we cannot rest on our laurels – we need to continue to invest in further research as well as share our research outputs with the rest of the world. In particular, there is a tremendous potential for Bangladesh to promote its scientific expertise in adaptation to climate change with other vulnerable developing countries.

Another domain for us to build our global diplomacy skills in is with respect to global climate finance, which is a growing opportunity that Bangladesh has not really been able to access at scale, as our finance sector lacks the skills to engage on this topic at the global level. This should be a high priority for investment in capacity-building of the public as well as private financial actors. This particular investment will have the greatest short-term returns for Bangladesh if we are able to access not just a few hundred million dollars a year, but billions if we learn to play the climate finance game well.

Finally, the best long-term investment is in our young girls and boys to make them our champions both for tackling climate change at home and by linking up with youth groups around the world – for example, through the Fridays for Future movement of school students. In particular, the global youth groups need to campaign on the issue to address losses and damages from human-induced climate change as the global leaders are failing to do so adequately.

To conclude, as the impacts of human-induced climate change become evident around the world every single day, and as this global problem will only get worse with time, Bangladesh has to invest in building its global climate diplomacy capacities while also tackling climate change at home. We have the potential to be a global leader in climate diplomacy if we make the right investments now.

Originally this article was published on August 30, 2022 at Daily Star. The author Prof. Saleemul Huq is the director of the International Centre for Climate Change and Development (ICCCAD) at the Independent University, Bangladesh (IUB).
Email: saleemul.huq@icccad.org