The issue of human displacement due to the adverse impacts of human-induced climate change used to be a topic of anticipatory actions, but it has become an active problem here and now. This is because the world has now entered the new era of losses and damages that are attributable to the fact that global temperature has already risen over one degree Celsius due to greenhouse gas (GHG) emissions. Although the Paris Agreement was put into effect to keep the global temperature rise below 1.5 degrees Celsius, this target is rapidly becoming impossible to meet – unless all countries enhance their respective pledges to reduce their emissions even faster than before. Unfortunately, this seems unlikely to happen.

Thus, it is now a high priority for all countries, especially Bangladesh, to take serious measures to deal with such loss and damage, and in particular with the issue of potential displacement of people due to climate change impacts, such as the recent floods in the northeastern part of Bangladesh. The most vulnerable parts of the country are the low-lying coastal zones, which already suffering from salinity intrusion as well as coastal erosion and cyclones. While Bangladesh has been successful in reducing the loss of lives from cyclones and floods, we have not yet been able to help the victims recover their livelihoods once the calamities are over.

Hence, it’s high time for Bangladesh to take this issue seriously both nationally and internationally.

Let me start with the process under the United Nations Framework Convention on Climate Change (UNFCCC), where this issue falls under the Warsaw International Mechanism (WIM), which has set up a task force on displacement due to climate change, which has produced its reports with recommendations for actions to “avert, minimise and address” loss and damage. This needs to be a priority in the upcoming 27th United Nations Climate Change Conference (COP27). At COP26 held last year, Bangladesh Prime Minister Sheikh Hasina raised this issue in her capacity as the chair of the Climate Vulnerable Forum (CVF) and was successful in getting the issue acknowledged. Now it has to be taken to the next level of getting funds to address losses and damages that are already taking place.

In addition to the UNFCCC, there are a number of other international fora and discourses where this issue is relevant and needs to be raised. Some of these important fora is the Platform on Disaster Displacement (PDD) and the Migrants in Countries in Crisis (MICIC), in which Bangladesh is already playing a leadership role. Just this week, our foreign ministry, in collaboration with the International Organization for Migration (IOM), held a successful high-level policy dialogue on the topic, which needs to be followed up by our missions in key developed countries such as the US, the European Union, the UK, and France. Such high-level policy dialogues can be jointly organised by the Bangladesh mission in each country together with the IOM. 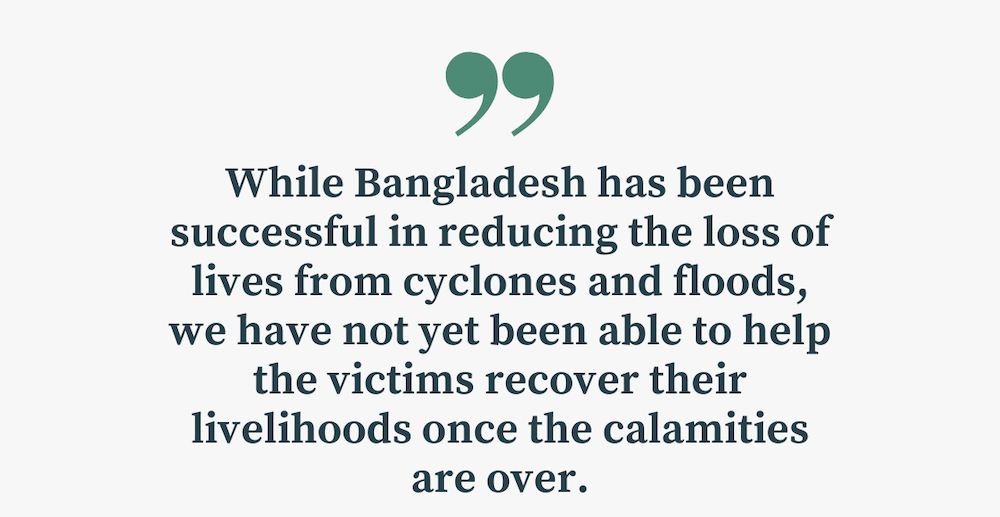 Another arena where Bangladesh can play a proactive role under the leadership of the environment, forests and climate change ministry is to propose a special report by the Intergovernmental Panel on Climate Change (IPCC) in its upcoming seventh IPCC cycle. Such a special report can be done by the IPCC in just two years, and we have a good example of the highly influential IPCC special report on 1.5-degree temperature rise, which was proposed some years ago by the CVF member countries.

The issue of forced displacement due to climate change impacts is one that can be turned from a challenge into an opportunity if we take the right kinds of anticipatory actions to minimise the adverse impacts and enhance the positive opportunities for potential future climate migrants.

Originally this article was published on July 26, 2022 at Daily Star. The author Prof. Saleemul Huq is the director of the International Centre for Climate Change and Development (ICCCAD) at the Independent University, Bangladesh (IUB).
Email: saleemul.huq@icccad.org

During the negotiations on funding for loss and damage in COP27 in Egypt last November, re…