(This article was originally published here)

Mr Sarder Shafiqul Alam is an experienced field researcher who pioneered many community-based adaptation projects in Bangladesh. He has an encyclopaedic knowledge of climate change issues facing the country and adaptation activities undertaken by local communities. He is currently the Urban Programme Coordinator for the International Centre for Climate Change and Development (ICCCAD) at the Independent University, Bangladesh. His expert point of view and lessons from the field unearths indigenous and scientific knowledge to better inform adaptation measures.

What does climate change adaptation mean to you?

What I have learned from the community is that they face climatic disasters and they have some mechanisms to cope to save their livelihood and well-being. Sometimes they fail to cope and sometimes they succeed. The adaptation strategies and actions which have been a success are replicated year after year. So I think that adaptation is a process, it involves actions and systems which can reduce climate change related vulnerabilities of the affected communities or their ecosystems.

How did you get started in climate change adaptation?

I’ve worked on climate change adaptation issues since 2003 when I was working for the Bangladesh Centre for Advanced Studies (BCAS). My first project was Reducing Vulnerability to Climate Change (RVCC), which was a Canadian International Development Agency (CIDA) funded and Care coordinated project that was in the Southwest region of Bangladesh. I was the leader from the BCAS part of the bid. BCAS had been doing climate change work since the 1990s and the executive director and chairman, who are lead IPCC authors organized many events on climate change. I learned from them first and then I learnt by doing from the RVCC projects. 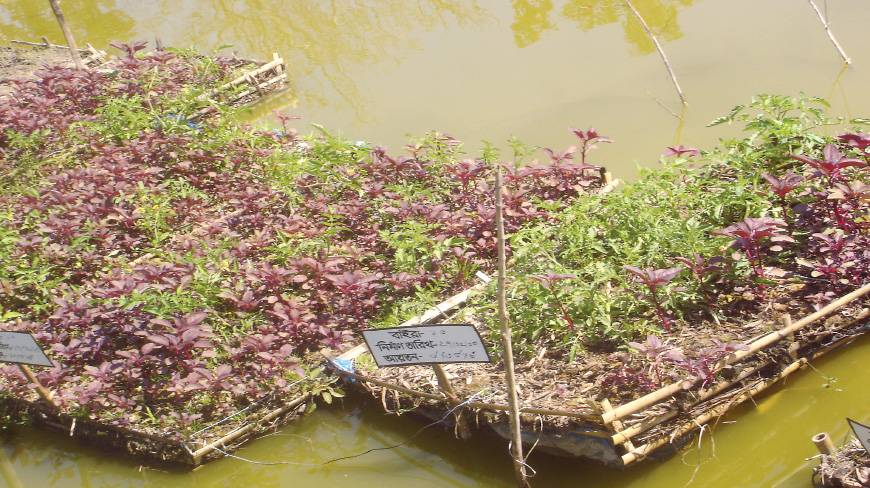 Floating bed cultivation is a source of livelihood and food for people in flodd affected area. The tecchnology uses bamboo, an old tube of a wheel, household garbage, and rotten aquatic vegetation or organic fertiliser to grow a number of diffferent vegetables.

What are some of the adaptation strategies that has worked in Bangladesh?

From 2003, we started to learn how different communities are vulnerable to climate change; we did community vulnerability assessments first. Then we assessed their adaptation needs and identified a number of actions.

In the agricultural field, we introduced an alternate crop cultivation called floating bed cultivation. When there is a flood, people can grow something and take that as food and also earn some income from the vegetables cultivated on floating beds.

We have planted short duration crop varieties. Such crop varieties are not damaged from floods or can be harvested before the floods come.

Another project was raising the homestead plinth, to make homesteads flood-free, enabling livelihood activites from the home.

What are some challenges with climate change adaptation?

What advice do you have for young people starting out in climate change adaptation?

My suggestion for young researchers would be to do a study on what sort of knowledge is available at the global level. Try to learn from that knowledge and share that knowledge with young people in the local communities. They should do something with that knowledge and learn how to better adapt to climate change. The young group, they will suffer more in future from climatic disasters and they need to know how to prepare for it.

Written by: Masroora Haque is the communications coordinator for the International Centre for Climate Change and Development at the Independent University, Bangladesh.

Success story from the informal settlements of Bangladesh

Informal settlements emerge and flourish globally, although they are still primarily found…