(This article was originally published here)

The year 2015 is a critical year for global climate negotiations. The agreement adopted at the climate summit in Paris in December (COP21) will test the willingness of countries to act collectively to ensure an ambitious and effective global agreement that secures a sustainable future for all. As negotiators gather in Geneva, the pressure is on to deliver a final negotiating text for the 2015 agreement.

The reason for this pressure is that Geneva is the only session planned before the May 2015 deadline when, according to the UN’s six-month rule, the negotiating text for a potential protocol under the UN Convention on Climate Change (UNFCCC) must be put on the table.

The aim of this new climate agreement was established at COP17 in Durban, South Africa, in 2011 with the adoption of the Durban Platform for Enhanced Action (Durban Platform), where countries agreed on the need for an ambitious agreement that has “legal force” and is “applicable to all.”

In Geneva, negotiators will be resuming work on the 37-page “elements of the negotiating text” adopted as an annex to the Lima call for climate action in December last year, with much work to be done to streamline the language and further clarify positions of the negotiating parties. 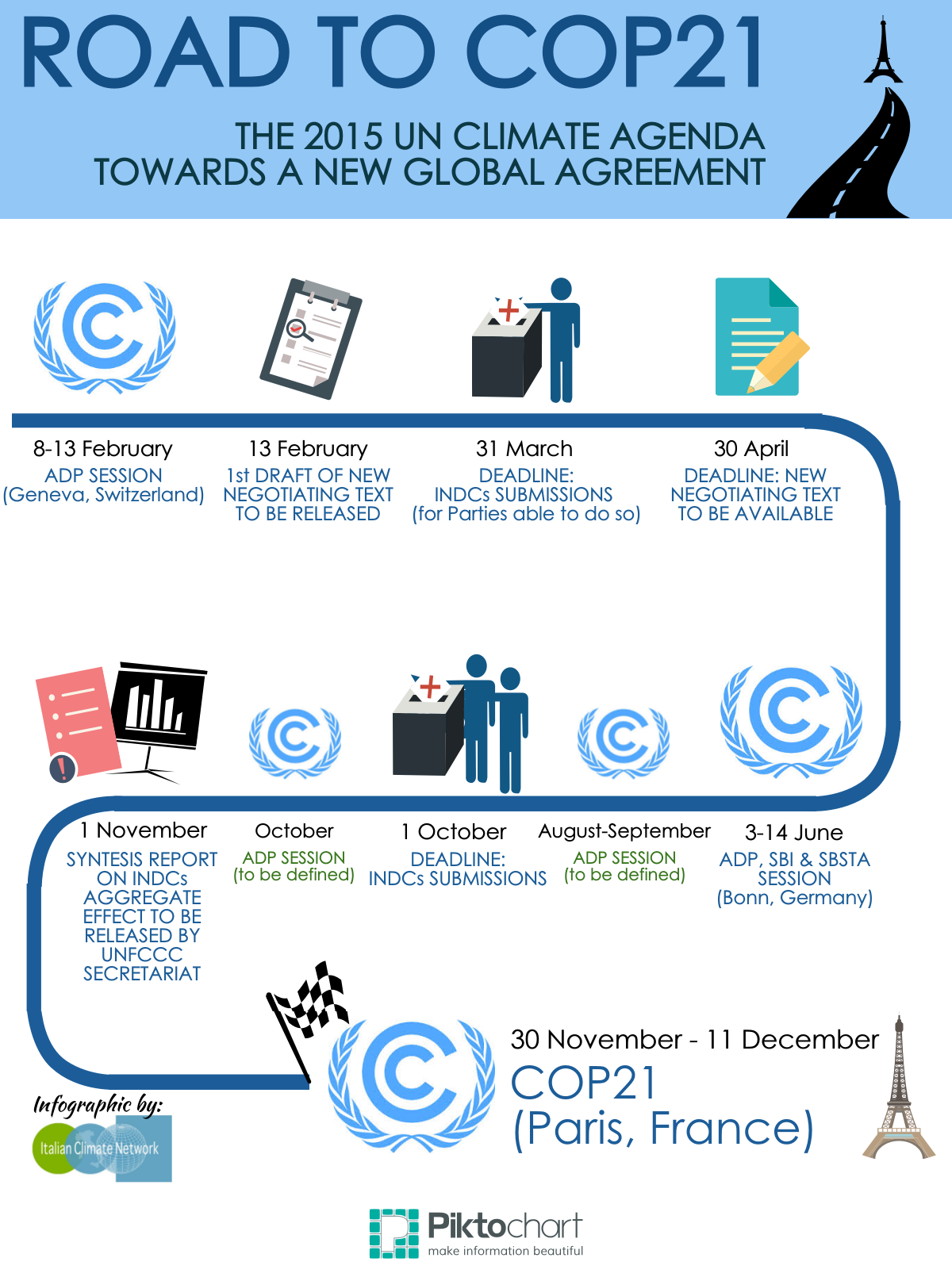 The Durban Platform calls on all parties to take ambitious climate action under a mutually-agreed, global, rule-based system and to cooperate to further implement the convention (ie, by acting to stabilise greenhouse gas (GHG) emissions).

While the 1997 Kyoto Protocol addressed emissions from only 38 of the parties, the new agreement covers emissions from them all. It will also address other issues, including adaptation, means of implementation for developing countries, and transparency of action and support.

In Geneva, talks are expected to focus on text on all these themes. As a concession to the heavy workload, negotiation sessions in Geneva will continue until 8pm, rather than stopping at 6pm.

The journey to Paris is currently following two separate tracks.

On one track, progress depends on the Intended Nationally Determined Contributions (INDCSs) delivered by parties. INDCs will set out how individual countries will contribute to the 2015 agreement.

In Lima, countries decided that each INDC will include a mitigation component; that each party’s INDC must go beyond existing commitments; and that countries can include their own assessments of how their contributions are fair and ambitious.

Parties that are ready to do so are requested to communicate their INDCs by the end of March.

Others, such as Least Developed Countries (LDCs) and Small Island Developing States, may communicate information on strategies, plans, and actions for low GHG emission development reflecting their special circumstances.

Parties may also provide voluntary information about the INDC, such as the baseline for GHG emission reductions, the time-frames and/or periods for implementation, scope and coverage, and planning processes to facilitate clarity, transparency, and understanding.

However, it is not mandatory for countries to provide this information. Yet, without such information, there can be little real transparency about countries’ commitments and, crucially, comparisons between them will be very difficult.

Under the Lima call for climate action, the UNFCCC secretariat is asked to publish countries’ INDCs online and to prepare a synthesis report on the aggregated contributions by October 1. This is intended to demonstrate the extent to which countries have collectively contributed to achieving the ultimate objective of the convention.

However, none of these arrangements currently ensures that the bottom-up INDCs will generate an ambitious and rigorous enough joint global effort to secure a low-carbon, climate-resilient, and safe future for the planet. In Geneva, parties have an opportunity to informally discuss and exchange ideas on generating ambition through their INDCs. They also have a chance to exchange views on the support available for developing countries in preparing their INDCs.

At the same time, progress on the second track is being made through the negotiating process for the main agreement. The growing momentum towards Paris seems to be encouraging broad participation, even if the initial ambition of INDCs might be low.

However, this means that the structure of the 2015 agreement needs to allow countries to ratchet up their ambition over time, ensuring that the future international climate agreement is truly meaningful. Hopefully, Geneva will deliver the negotiating text for this track to complete its work by the end the year with a framework that facilitates such a meaningful agreement.

Obstacles on the road

There are also major sticking points. There is currently no consensus among parties whether to include an international review mechanism in order to ratchet up ambition over time, or on how to apply the principle of common but differentiated responsibilities and respective capabilities between developed and developing countries.

Other areas of disagreement are over the long-term temperature goal, commitments to finance needed for climate action in developing countries, commitments to enhancing adaptation actions and encouraging climate resilience development, addressing loss and damage due to climate impacts, addressing barriers to technology transfer and agreeing on an international compliance mechanism.

All of these will require lengthy negotiations and hard compromises. The “Geneva streamlined text” will allow parties to more effectively negotiate on these issues in the coming sessions.

Parties will seek to hold three more negotiating sessions before Paris, including the June session held in Bonn and two additional sessions towards the end of this year. If Geneva delivers the streamlined final negotiating text for the 2015 agreement, it will be translated into six UN official languages ready for the real negotiations for the final agreement starting with the session in June.

As such, Geneva is the most important step this year for delivering a new global climate agreement in Paris. It will help further clarify how the current pragmatic hybrid architecture, combining the bottom-up INDCs and top-down international rules, to ensure that ambition will be applied in the new agreement.

We hope that the parties will use time in Geneva constructively for this purpose, rather than succumbing to lengthy procedural discussions.

The youth wants reparations, not charity or debt

What the climate crisis requires is action, not more words

In September last year, my organization YouthNet for Climate Justice, facilitated a joint …