The ongoing devastating floods in Pakistan, which follow a deadly heat wave from just a few weeks back, is not just another flood event. They are, in fact, a manifestation of the undoubted fact that the world is already suffering the impacts of climate change and the consequent losses and damages. Even when the floodwaters continue to inundate nearly a third of the country, with over a thousand people dead and millions homeless, it is still possible to identify what needs to be done going forward in Pakistan as well as the South Asian region, and indeed at the global level.

The first lesson for Pakistan is that, though a flood of this magnitude might have been a once-in-a-century event in the past, it will, unfortunately, become more frequent in the years to come. Hence, it is essential to put in place appropriate measures to prepare the country and the people to be ready to face such events in the future through adaptation to climate change. This problem is not just Pakistan’s, but of every country in South Asia, particularly because of shared rivers and ecosystems, such as the Indus River between India and Pakistan, and the Ganges and Brahmaputra rivers between Nepal, India and Bangladesh. All these common problems will require much better cooperation between the neighbouring countries as no country can deal with this problem on its own.

Thus, the environmental cooperation and particularly efforts to adapt to climate change need to be coordinated between the countries in South Asia. This can and should also include sharing knowledge on how to tackle the different problems, as each country has expertise in an issue that can be shared with the other countries. For example, Bangladesh can share its expertise in cyclone warning and preparedness as well as locally led adaptation in its coastal areas. India can share expertise in urban adaptation and also adapting to heatwaves, while Nepal and Bhutan have expertise in adaptation in mountain ecosystems and Pakistan has expertise in managing droughts. There is much that can be achieved by enhancing knowledge-sharing within the region through regional bodies and groups, such as Saarc. 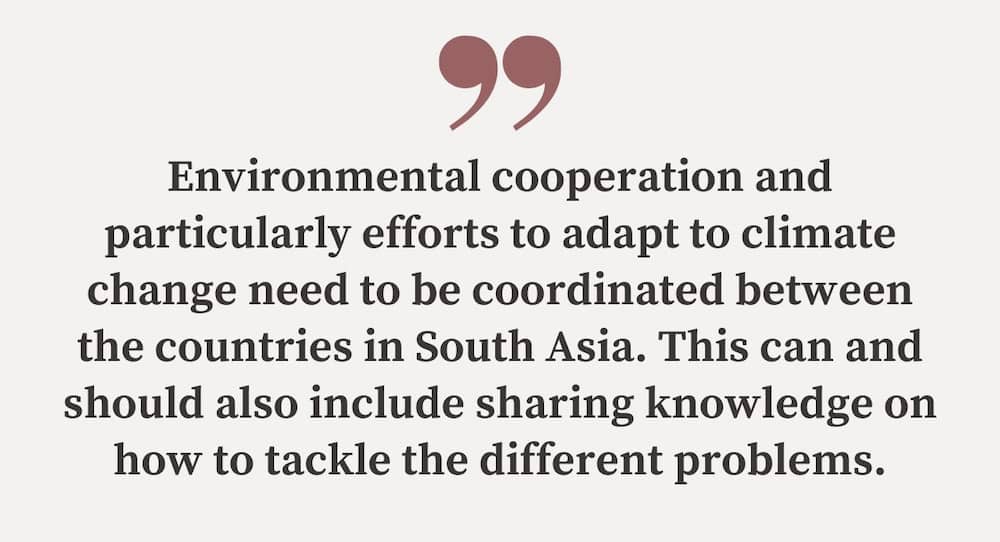 At the global level, there is also much that can be done and needs to be done on a priority basis. The first issue is linked with the United Nations Framework Convention on Climate Change (UNFCCC), where the developing countries have been advocating for creating a fund to cover the losses and damages caused by human-induced climate change. Unfortunately, this demand, which was put forward by Pakistan on behalf of the developing countries at the annual climate summit COP26 last year, did not get accepted by the developed countries. It has now been put forward again for the agenda of the upcoming COP27, scheduled for November this year. It still has to be adopted at the beginning of the COP by all the other countries – we should all lobby very hard to ensure that. If it fails to get adopted, then COP27 will be a failure before it even starts.

The climate change minister of Pakistan has already declared the enhanced magnitude of the floods in the country as the result of human-induced climate change, hence the need for the rest of the world to provide finance to Pakistan to address the losses and damages caused by the floods.

One of the greatest global champions for promoting more urgent action to combat climate change has been UN Secretary-General Antonio Guterres, who has been urging countries to take actions more urgently than they have done so far. However, beyond urging governments to take action, the UN chief can take one important action himself, which is to appoint a special envoy for addressing loss and damage from human-induced climate change. The main role for the special envoy would be to bridge the gap between the UNFCCC and the UN Office for the Coordination of Humanitarian Affairs (UNOCHA), which brings together the humanitarian actors who deal with the impacts as they occur. Also, the envoy would be able to link global-level actions with actions at national and even local levels through agencies as well as international civil society groups.

From now on, we will see new, perhaps record-breaking weather events in different parts of the world more frequently, with cumulative impacts that might dwarf the impacts of the Covid pandemic and the Russia-Ukraine war put together. The world is not at all prepared for facing this emergency, and must get ready urgently if we hope to minimise the adverse impacts of these events. Preparations need to be made at local, national, regional and global levels at the same time, with close coordination across these different scales. South Asia has the opportunity to be a leader in linking these actions at all these levels going forward. There is no time to lose.

Originally this article was published on September 6, 2022 at Daily Star. The author Prof. Saleemul Huq is the director of the International Centre for Climate Change and Development (ICCCAD) at the Independent University, Bangladesh (IUB).
Email: saleemul.huq@icccad.org