On February 28, the sixth Intergovernmental Panel on Climate Change (IPCC) Assessment Report (AR6) for Working Group II (WGII) was released, serving as the new basis for global policy-making on how to adapt to climate change.

As one of the most vulnerable countries to climate change and a global leader in adaptation, Bangladeshi scientists should be at the forefront of work on adaptation in Bangladesh. However, in past IPCC reports, foreign scientists have dominated the lead authorship in this area. Is there something different in this report?

The WGII report focuses on “impacts, adaptation, and vulnerability.” It follows a new report from IPCC Working Group I on the physical science of climate change, released in August 2021, and precedes the Working Group III report on mitigation that will come out in April 2022.

The IPCC reports summarize all scientific publications on the most pressing issues related to climate change. As adaptation to the impacts of climate change has become an increasingly urgent issue, especially in places like Bangladesh, the IPCC’s attention to adaptation and vulnerability has grown. This new WGII report informs how Bangladesh will address its vulnerabilities and set adaptation priorities.

The research that is cited in the IPCC reports must be peer-reviewed and published in reputable academic outlets. This is a high standard, especially for scientists in the Global South. Producing such work requires substantial effort and resources, including access to expensive academic journals, resource-intensive research, and writing up the results in English. Successfully publishing IPCC-eligible work means scientists contribute to the global knowledge basis about climate change and the policies that are made based on it.

This has led to inequality in IPCC reports, both in the authors of the cited publications and the IPCC authors themselves. We already know that only two of the 163 authors of the WGII report are from Bangladesh. In contrast, 31 authors come from the United States. Across all three working group reports for AR6, only 44% of authors were from “developing countries and countries with “economies in transition.”

This is a slight improvement from the fifth assessment report in which these countries represented 37% of authorship. The majority of authors are still men who come from the Global North.

What about the scientists producing research on climate change? Studies have found that the majority of top-cited climate articles come from only three countries: the US, the UK, and Australia.

When Reuters published a “Hot List” ranking the world’s top climate scientists in 2021, more than 75% were from Europe and North America. In a study of the first authors of publications on Bangladesh cited in the last WGII report, it was found that only 26% came from Bangladeshi institutions, while 74% were from international institutions.

We investigated whether Bangladeshi scientists are being cited for work on Bangladesh and adaptation. To do this, we reviewed the first five WGII reports and searched for mentions of “Bangladesh.” We collected the relevant citations, along with all additional publications cited in the report with “Bangladesh” in their titles. 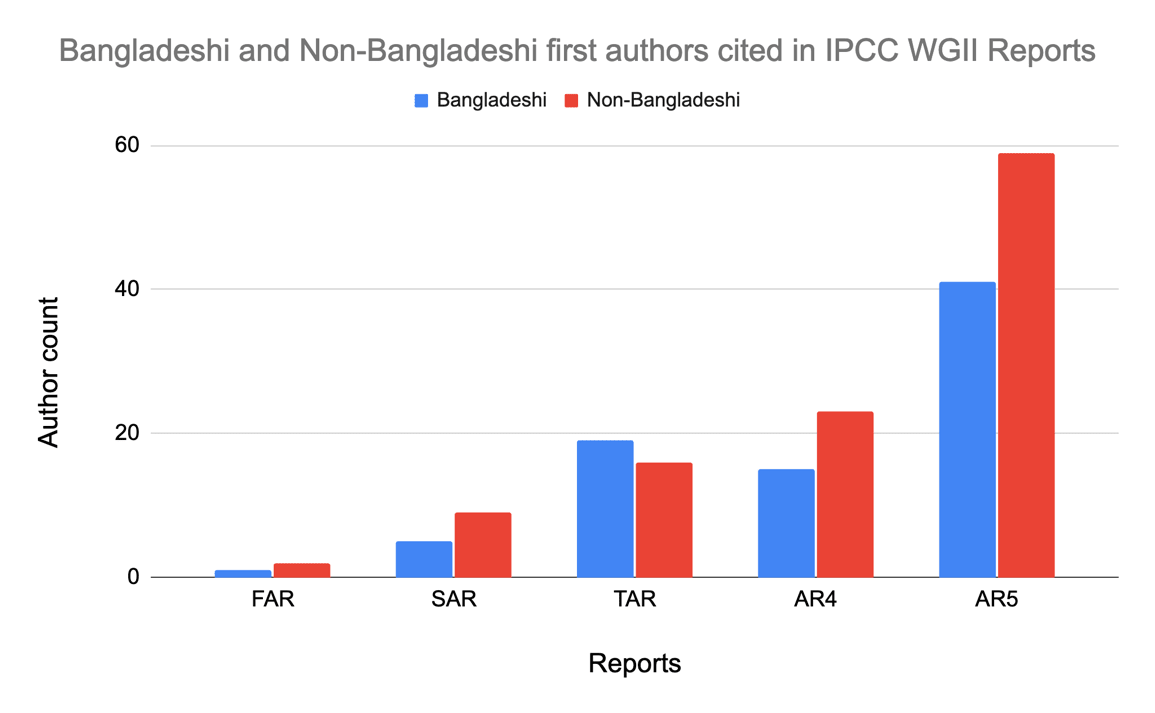 Though it is difficult to determine the location of individual authors at the time they published their research, we also worked to identify whether Bangladeshi authors cited in the reports were primarily located in Bangladesh or abroad. In each of the five reports, about one-third of the Bangladeshi authors were located outside of Bangladesh, typically at research institutes and universities in the Global North. This shows the continued importance of connections to foreign institutions for producing IPCC-eligible publications.

The authorship of publications cited in the new WGII report the continued barriers Bangladeshi authors face in publishing. There are numerous Bangladeshi researchers producing insightful and innovative work that should be foregrounded in the global knowledge base on adaptation. With their added benefit of close knowledge of the local context, they should be the primary references for determining the impacts, adaptation, and vulnerability of Bangladesh. Their work deserves proper recognition and consideration in policy-making.

It is critically important that scientists from the Global South have a powerful voice in shaping global conversations on climate change. Their countries have contributed the least to climate change but will experience the worst impacts. These are also the countries where substantive work is being done to adapt. Investment in researchers from countries like Bangladesh, support for their publishing, and attention to their work from the IPCC can only benefit global efforts to combat climate change.

We hope that forthcoming reports will reflect a shift toward greater recognition of Global South contributions to climate knowledge.

Originally this article was published on March 2, 2022 at Dhaka Tribune.

Sirazoom Munira is working as Program Officer to support Climate Vulnerable Forum Presidency of GoB based at the Global Centre on Adaptation.

Turning Bangladesh into a knowledge-based economy