In the Singida region in Tanzania, we meet Amani Saidi Mwangu, an onion and tomato farmer who defies climate change to secure his livelihood.

This is the second of the ‘Voices from the Frontline (Phase-II)‘ stories by ICCCAD and GRP.

The Singida region is one of the most climate-vulnerable regions in Tanzania. It has a semi-arid climate and about 80% of the population is primarily dependent on rain-fed agriculture, many of whom are smallholder farmers. Despite being a major source of income in the Singida region, farming come with major challenges of low production and productivity due to unreliable rainfall, pests, poor soil fertility, improper use of agriculture inputs, and poor infrastructure. Many of these challenges are the result of climate change.

Ever since the exponential increase of climate change’s impacts on the agricultural sector, the government of Tanzania has been promoting local, innovative adaptation strategies to improve the productivity and production of smallholder farmers’ agriculture.  One of these strategies is climate-smart agriculture, which includes the use of improved drought tolerant and early maturing seeds, agroforestry, cover cropping, conservation agriculture, and intercropping. Smallholder farmers are eager to adopt these techniques and strategies to boost their agronomic skills and support their livelihoods.

Amani is a 31-year-old smallholder farmer living in the Ipungi village of Singida municipal council in Tanzania. He grew up in a farming community that predominantly planted traditional and local onion and tomato varieties. These have become susceptible to the changing climate, insect attacks, and diseases, Amani witnessed firsthand the devastating effects poor harvests had on his family, friends, and neighbors. 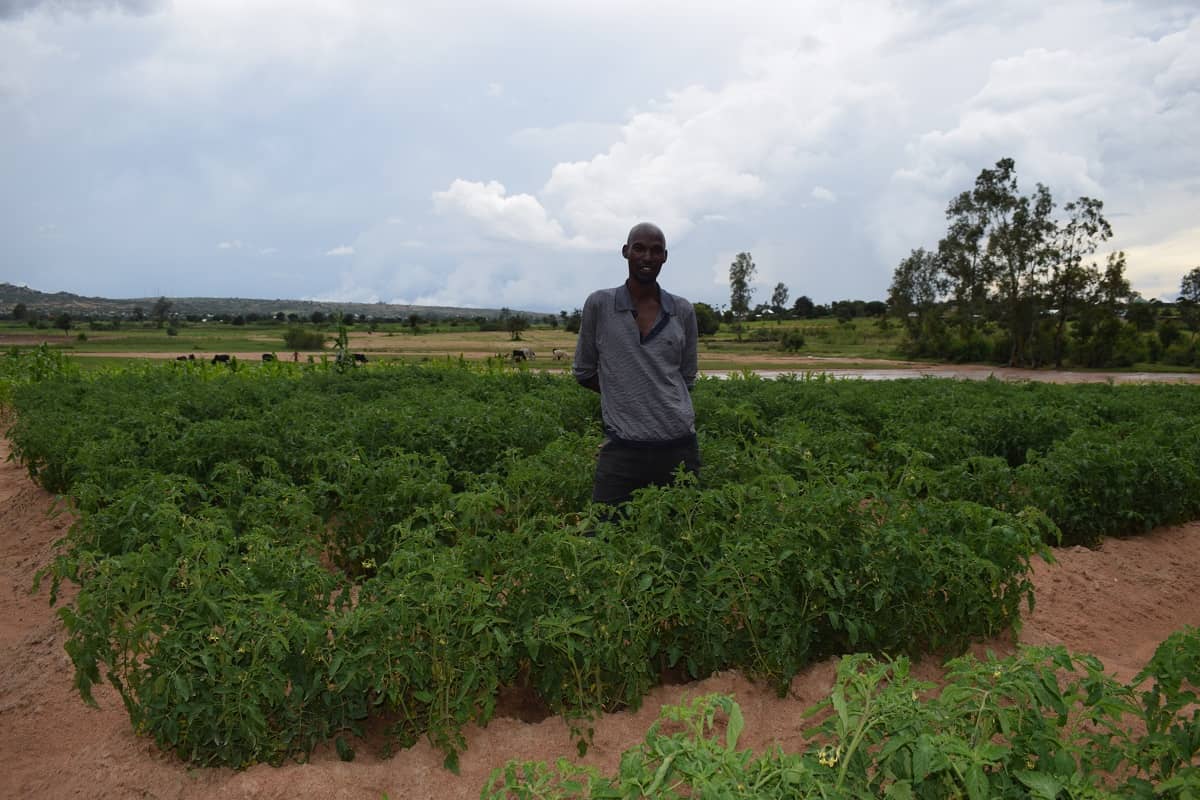 With the desire to support his family against the challenge of climate variability, he enrolled in a training organized by Sustainable Environment Management Action (SEMA) and supported by the International Labour Organization (ILO) in November 2018. The training aimed to empower youth entrepreneurs to improve their livelihoods by stimulating an entrepreneurship culture among local youth while supporting the creation of sustainable and environment-friendly enterprises. Through the training, Amani evolved his cultivation initiatives and began practicing climate-smart agriculture and irrigation.

Upon completion of the training, Amani and a group of his friends self-titled the “Muungano Group’’ received a 3,000,000 Tanzanian shilling loan that helped them purchase agricultural inputs and tools like fertilizers, pesticides, insecticides, and improved seeds, effectively kick-starting their farming activities. The group was also connected with the local agriculture extension officers, who provided them additional training on climate-smart agriculture such as the use of improved drought tolerant and early maturing seeds, agroforestry, cover cropping, conservation agriculture, and intercropping that boosted their agronomic skills.

Together with other youth champion farmers who had participated in the training sessions, Amani shares agronomic knowledge and promotes the spread of planting improved seed varieties as one of the adaptation strategies to climate change in his community.

With better onion and tomato varieties and improved agricultural practices, Amani was able to improve his income and better adapt to the impacts of climate change and even build his family a modern house. 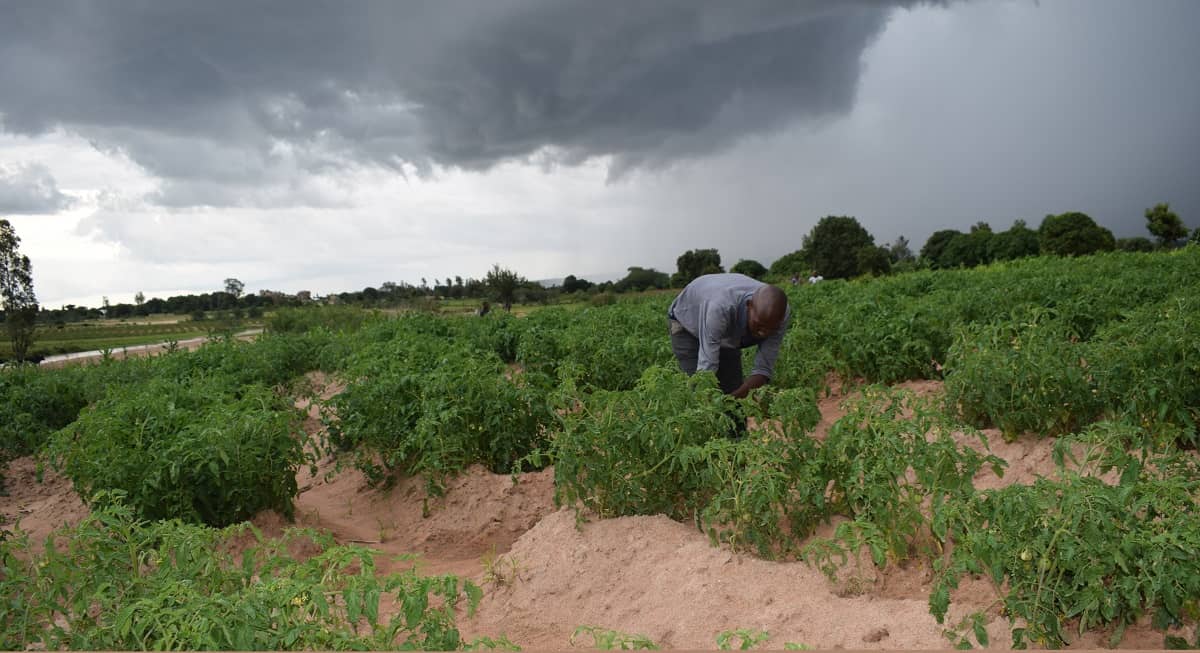 He currently harvests between 400 to 500kg of tomatoes and 150 bags of onions per acre with demand coming from places as far as neighboring countries of Uganda and Kenya. “I’m happy to observe higher pest tolerance and disease resistance capabilities, and a shorter maturity period of three months for the new varieties of tomatoes and onions such as Bombay red and Red creole, which lead to higher production. Irrigation farming and climate-smart agriculture farming have helped me change my living standard since I produce onions and tomatoes throughout the year, which has allowed my income to grow,” says Amani.

Amani is now called a champion in his village when harvesting tomato and onions.

Weather variability is inevitable and causes local communities to experience an increase in temperature, flooding, and drought. The impact of climate change creates a need for the community to apply local adaptation strategies like Climate Smart Agriculture techniques. These techniques include crop rotation for maintaining soil fertility, intercropping with leguminous plants for nitrogen fixation, drip irrigation for water use efficiency, and using resilient practices such as drought resistance seeds and early maturing varieties. All of these measures tend to increase production and productivity.

These techniques are not well known and established in the communities, especially in developing countries. Government and non-government development actors can help support the needs of these communities by providing them with increased access to extension services, access of resilient seeds at affordable prices in their local areas, constructing resilient infrastructure to allow their goods and products to be transported, and providing them with training on different adaptation and mitigation techniques that contribute in the increase of production and productivity.

Charles Mnyororo is an experienced WASH engineer. He applies his knowledge in WASH school interventions and community interventions. He is also interested in working on climate change.

Emmanuel Hamisi is a microfinance expert working with women groups in grassroot communities.

Emmanuel Msumba is a youth and microfinance expert with vast experience working with grassroots communities.

Amani Mwangu is a 31 year old agribusiness entrepreneur, who has dedicated his life to onion and tomato farming for family economic livelihoods and life sustenance.

Changing with the Tides of Change: A Women’s Group Journey towards Climate Resilience

Want to contribute a story?
Contact us: fahad.hossain@icccad.org
Blogs from Voices from the Frontline (Phase-I)