In Kliptown, South Africa, a grassroots organisation is leading community responses to deal with the dual crises of Covid-19 and flooding. Thabang Nkwanyana reports.

This is the fiftieth in the series of stories from Voices from the Frontline initiative by ICCCAD and CDKN.

Kliptown is a ribbon of 13 informal settlements along the bank of the Klipspruit River. Across the water is the sprawling township of Soweto. Established circa 1903, Kliptown is one of the oldest mixed-race neighborhoods in Johannesburg. The population is estimated at over 38,000, occupying 0.77 sqkm1. 2020 unemployment statistics are 60-70%[1], but our lived reality puts it much higher.

The water and sanitation infrastructure is terrible: an average of seven families share a chemical toilet. Communal taps or barrels are the only source of water. Inyoka-Inyoka (snaking) cables run across the ground from the closest transformer, broken open to supply electricity. Houses are often one poorly ventilated room. These are the statistics of the dense ghetto where we grew up, but these don’t tell the whole story.

The dusty streets of Freedom Charter Square are deeply carved by erosion from  urban runoff. But still the people of Kliptown don’t want to move. People love their ghetto, it’s a place rich in history. It was here in 1955 that the People’s Congress gathered and signed the Freedom Charter, which shares demands from people across the country for a free and democratic South Africa during Apartheid (“apartness”), where racial segregation was insitutionalised by the white minority government. The Charter formed the basis for the Bill of Rights in South Africa’s Constitution 30 years later in 1996 after the country transitioned to a democracy. It’s a place where people rely on their social ties and connections:Where you can easily catch a Minibus Taxi to town, send your children to the neighboring schools, and clinics are far, but not too far.

However, this sense of community was tested during the pandemic. As Covid-19 marched relentlessly across the globe, President Ramaphosa spoke valiantly of solidarity, but we were scared to think of the consequences here. What does solidarity mean to Kliptown? The reality is a legacy of decades of government neglect. This community doesn’t have adequate basic services and we live under the seasonal threat of severe flooding.

“1955 Creative Collaboration” is a grassroots but globally-thinking social enterprise start-up  in Kliptown, Soweto. It is the brainchild of longtime friends and colleagues, a group of artists, visual creatives and an academic who continually learn from each other in grappling with our passions for art, social equity and spatial justice. 1955 is a reference to South Africa’s Freedom Charter and reflects our belief that human freedoms are the avenue to empower communities. We work to break down racial, gender and knowledge hierarchies. We creatively bring our unique knowledge sets together to address the local issues facing Kliptown.

In mid-February 2020, the news of Covid-19 was spreading by mainstream media, word of mouth and across social media. But where was that solidarity? Ginger, a member of the 1955 crew comments, “The thing that we noticed mostly was the lack of visibility of the local government”, and Robert, a local community leader confirms this. So, before the first case was announced in South Africa, we in 1955 knew that we had to act.

We read and discussed World Health Organisation (WHO) and Center for Disease Control (CDC) recommendations, lessons learned from previous epidemics, we listened to the early conflicting announcements over the use of face masks. Knowing the general filth of Kliptown, the high levels of ambient particles in the air, the burning fuel that already irritated residents’ lungs, our hearts sank. Living in Kliptown we knew that none of the protocols for physical distancing, remaining in your home or in well ventilated spaces, and frequent hand washing were possible.

We called an old friend, Dr. Carlyn Collins, who had worked for years at the height of the AIDS epidemic in southern Africa. Together we decided to focus on addressing the communal toilets as a critical place for Covid-19 transmission and to support hand washing. If you’ve never been inside one of our chemical toilets, they’re poorly ventilated, stuffy, hot, smelly – we were hearing that poorly ventilated spaces were where you picked up viral load. Our strategy was simple and effective: to regularly disinfect the toilets with a dilute bleach solution (WHO, CDC), to supply soap for hand washing and the dignity of toilet tissue to the most vulnerable.

Ginger explains how we started, “As visual creatives and artists we [1955] put to work our craftsmanship in designing personal protective equipment (PPEs) for the sanitising crew”. These were then made by local furniture upholsterer Nhlanhla Maseko. And thus equipped, “We carefully moved through the community handing out dignity packs to the elderly. We normally dealt with around 350 families in Kliptown. We highlighted the importance of wearing masks and washing hands, especially under the lockdown regulations”. And in return, those “vulnerable” gogos (grannies) surprised us, they created hand washing stations!

From early on, explains Robert, their work as leaders was “to keep the community aware of the virus, to remind them that it is living, it spreads and it kills”. He then adds, “What I can tell you is that 1955 is doing a lot in our community because we are using public toilets for which after the city drains the [chemical] toilet, 1955 comes and sanitises the toilets. Through the pandemic they supported the most vulnerable with hand washing soap and masks. Without 1955 we would have had nothing at all”.

Meanwhile, Covid hit artists hard. And we’re artists. For positive inspiration during this time, we partnered with Kliptown local Bocomo Gallery and painted murals. By now mask wearing was public law in South Africa, so we painted a reminder to wear a mask. “Gender-based violence continued, and under Covid goes up” (Robert), so we painted the strength and value of women and of fathers playing with their children.

Fundraising to fight against Covid-19

At 1955, we started off thinking that Covid would last a couple of months, but lockdowns, curfews and waves of high infection rates have gone on and on. We’ve now run this initiative for 19 months and South Africa is just recovering from its fourth wave. Movement around the city came to a standstill, jobs went online or were lost, school taught virtually. All of this had a huge impact on a place with no internet access.

Robert shared that, “I am not working, I lost my job due to Covid-19. I am jobless now. If there are no jobs there is nothing for people. I am planting a garden at my place. If you have no job you have no money, I cannot go to the shops to buy so I plant spinach and carrots and so on”.

As time passed we saw and felt this desperation. We had to keep our project going. None of us had ever done fundraising, but we learned. We set up a website, initiated Mutual Aid and launched a fundraising page. Part of our vision as a social enterprise has always been that we aren’t a charity or an NGO, we want to earn our way. But with Covid-19 in the community, we’ve been desperate for every penny of the just under R90,000 (US$6,000) we’ve raised. We’re proud that we’ve paid our crew of eight people  every week.

Just over a year into the pandemic, the government announced its vaccine rollout, creating an online registration portal. But how do people in this ghetto use an online portal? In response to the lockdown, internet servers were expanding. Finally, Kliptown was on the edge of the coverage map, so we decided to try a 5G hotspot. To support this, we reached out and launched another round of fundraising this time partnering with local Joburg PR firm A Girl & A Guy. With our router, that gets moved around the community, students have connected with school, community leaders have attended critical meetings with city officials, and people have registered for their vaccine. And importantly we don’t feel quite so isolated. 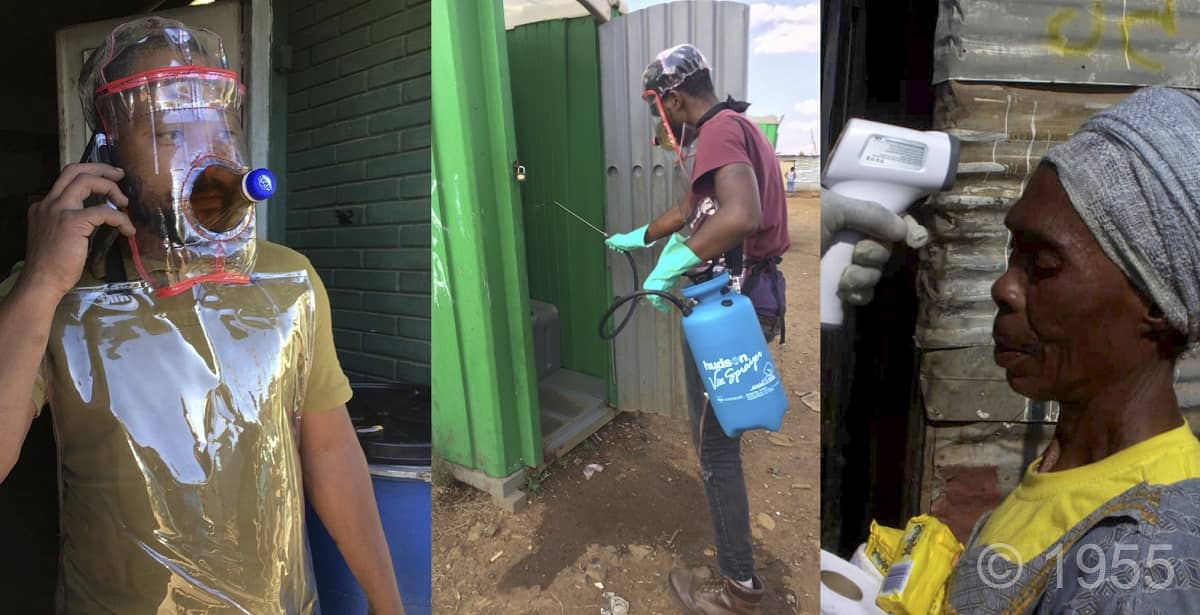 1955’s dream is a community radio station. Ginger explains, “We [1955] believe in the digital information era. It is relevant and imperative for a community like Kliptown to have a community radio and/or TV station to organize and share any information under crisis, especially since the local government is not active or visible. I think that the best potential solution is the community radio station because you can easily amplify the community’s common voice and represent our priorities to the government also for stuff like highlighting the flood lines, when there is too much flooding it would be easy to use the radio station as a way to send out your messages”.

He was referring to the flooding that hit midway through the pandemic. The rainy season came, and it was bad. With climate change, the storms are getting more intense. About this time, in November 2020, a friend and supporter of 1955 gave us a drone. As it turned out, the drone had a real community impact. As Ginger explains, “under lockdown we assisted the city by providing drone footage of the flooding and providing images of the flood lines during the heavy rain storms”. We took footage of flooding and WhatsApped  it to city officials advocating to enlist urgent aid, and then to the media when no aid arrived.

As artists and visual creatives, we never imagined ourselves sanitising toilets, but we’ve been doing it to support our community. We’ve learned a lot and found a sense of freedom. What I’d really like to see for Kliptown is it being independent and doing things on its own. For years we’ve been in Kliptown but we haven’t seen anything positive. Unless we Kliptowners start thinking positively and acting positively nothing will ever change, because waiting for the government will never change Kliptown. 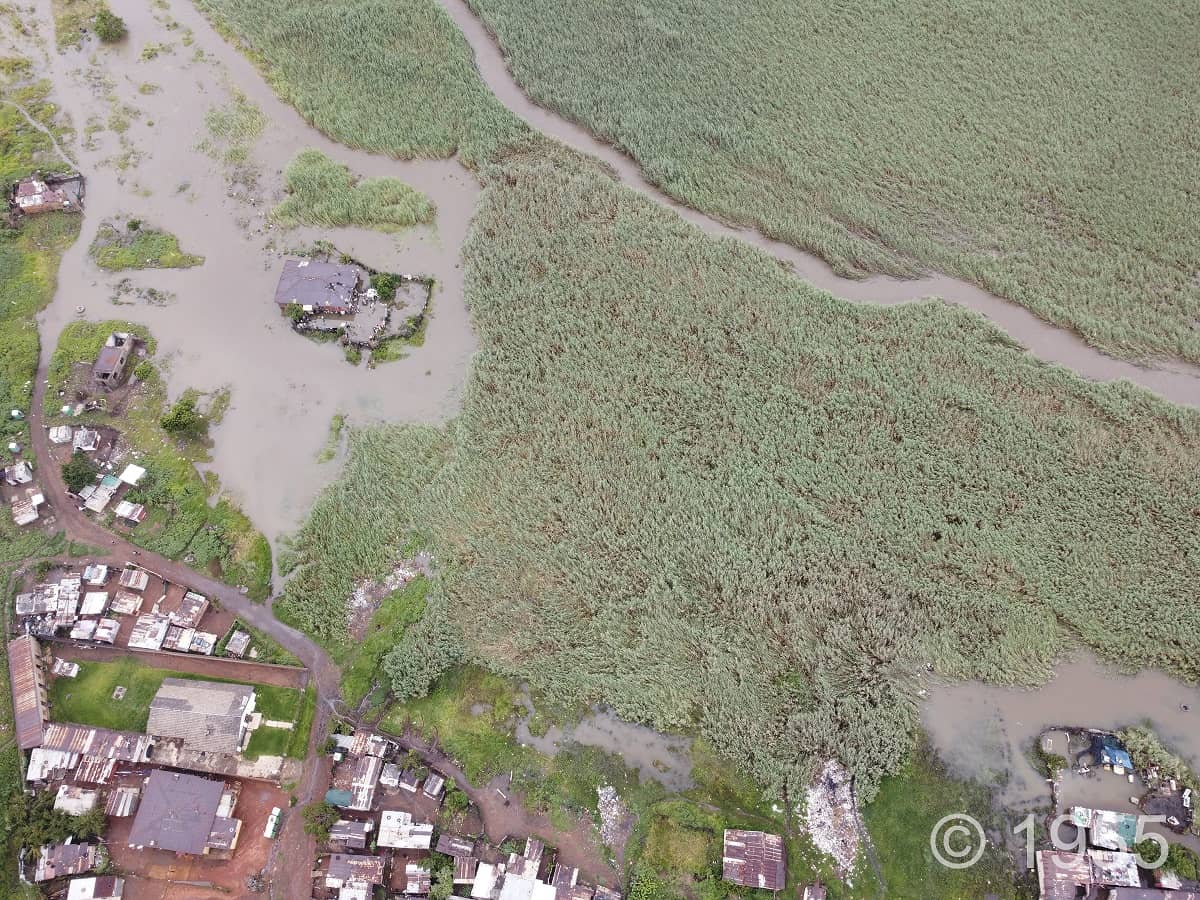 Thabang Nkwanyana is the Director and co-founder of 1955 Creative Collaboration, a Kliptown social enterprise addressing today’s socio-spatial issues with creativity and innovation. He teaches young underprivileged kids photography at Sifikile School of Photography, Soweto. And was a founding member of Post Gallery, a small exhibition space in the Kliptown community (2014-15).

Ginger Mahlamvu is the resident artist at Kliptown’s Becomo Gallery, he teaches art to the Kliptown youth and is a member of the 1955 crew. He is 41 years old and has lived in Kliptown for about 30 years.

In the Kwara Kwara state of Nigeria, two young women have campaigned for resilient recover…